First flown as early as 1935, the Messerschmitt Bf 109 (often referred to as the Me 109 or simply the '109' by Allied pilots) would become the standard German day-fighter of the war, and an enduring symbol of the Luftwaffe. The Bf 109 was a revolutionary all-metal monoplane designed by Willy Messerschmitt built around the smallest possible airframe capable of using the most powerful engine of its day. As such, it boasted excellent performance (particularly in climb, dive and acceleration), although it was hampered by tricky take-off and landing characteristics due to strong torque. Its effectiveness was proven for the first time during the Spanish Civil War and it was no less successful during the 1939-40 Blitzkrieg campaigns where it cleared the skies for the Luftwaffe. It would finally meet its match against the RAF during the Battle of Britain: although superior to the Hurricane, it was roughly on par with the Spitfire with which it would form one of the greatest air combat rivalries in history. Like all great aircraft of World War II, the Bf 109 went through various modifications in order to remain a viable front-line fighter even after the introduction of its planned successor, the Fw 190. Indeed, the Fw 190's poor performance at high altitude gave the Bf 109 a renewed lease of life in the final years of the war as it was pressed to stem the Allied bomber onslaught from 1943 onwards. However, limitations of the aging airframe plus the loss of maneuverability due to the extra armament and protection put it at a slight disadvantage against late-war escort fighters like the US P-51, although in the hands of a good pilot the Bf 109 remained a formidable machine until the very end of the conflict (it shot down more Allied aircraft than any other). Aside from its qualities as a fighter, the Bf 109 maintained its position as the mainstay of the Luftwaffe force thanks to its massive production run which was second only to the Soviet Il-2. It was also used to some extent by most Axis nations as well as Finland and Switzerland (serving well into the post-war years) and even license produced in Czechoslovakia (by Avia) and Spain (by Hispano) bringing the total number of Bf 109s and its derivatives to an incredible 35,000 units. Most high-scoring Luftwaffe aces flew the Bf 109, and many even refused to switch to the more modern Fw 190 when it became available, a testament to the confidence in its capabilities.

Origins of the Bf 109 lay in a 1934 RLM requirement for a small lightweight fighter which first flew as the Bf 109V1 prototype on 28 May 1935 with a Rolls-Royce engine. Production models began with the Bf 109B, a number of which were sent to the Condor Legion for service in Spain along with the Bf 109C which had more powerful engines and armament (the similar Bf 109D was the last major pre-war variant). The first with the improved Daimler-Benz 601 engine was the Bf 109E 'Emil' which formed the backbone of Germany's fighter force when the war began. Against the Spitfire it was evenly matched: less maneuverable but with the edge in climb and dive rates. Early aces included Adolf Galland (104 kills of which over half were on 'Emils' during the Battle of Britain) and Werner Mölders (101 kills including 15 with the Condor Legion). Later sub-variants were equipped with drop tanks for longer range which proved to be an important asset in the Mediterranean and North Africa. The Bf 109F introduced rounded wingtips and a sleeker forward fuselage and spinner. It saw extensive service in the Eastern Front and in North Africa and was considered by most pilots to be the finest version of this aircraft on account of its superior handling and maneuverability, keeping it up to par with the Spitfire Mk. V. African ace Hans-Joachim Marseille (158 kills, all of which were against the Western Allies) flew Bf 109Fs. Fitted with a more powerful engine, the Bf 109G 'Gustav' emerged in 1942 and was the most widely produced variant accounting for approximately two-thirds of all units built. The war's highest scoring ace, Erich Hartmann (352 kills) mostly flew this type in the Eastern Front even though it was generally less well-liked than its predecessor since its heavier armament and protection made it less maneuverable. However, its engine did not suffer at high altitude like the Fw 190's and as a result, it was used extensively as a bomber destroyer. Major sub-variants included the mass-produced Bf 109G-6 and the Bf 109G-10 which introduced the 'Gallant' hood for improved pilot visibility. Although the Bf 109's airframe all but reached its potential by the final years of the war, a number of late versions were introduced starting with the Bf 109K which attempted to standardize the many variable features of the 'Gustav', most notably the 'Gallant' hood. The last variant developed was the pressurized, high-altitude Bf 109H which was never put into production while a shipborne version, the Bf 109T, was designed for service on Germany's incomplete Graf Zeppelin aircraft carrier. 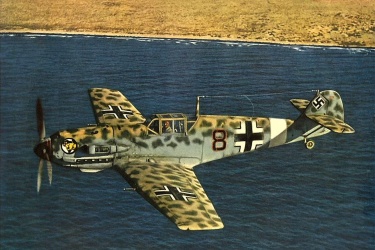