The Arado Ar 196 was the standard shipboard catapult aircraft found on board most major German heavy warships like the Bismark, Tirpitz, Scharnhorst and Gniessenau as well as the smaller pocket battleships and cruisers. Built to replace the older He 60 biplane, it performed successfully as a reconnaissance platform, shadowing enemy vessels at sea and was generally considered to have good flight characteristics -as good as any other Allied aircraft of its type- as well as the versatility to perform other roles such as anti-submarine warfare, light bombing and convoy escort operations. Ar 196s also flew missions from shore (including a notable operation when two North Sea based aircraft helped capture a British submarine) mostly after Germany's capital ships were retired from the high-seas. Foreign users were Bulgaria, Finland, and Romania.

The first prototype Ar 196V1, which performed its maiden flight in May 1938, was designed with a large single central float which was eventually substituted by a twin float configuration. Pre-production units were designated Ar 196A-0 and were followed by thd Ar 196A-1 production model with a strengthened structure for catapult launchings. Later versions included the Ar 196A-2 with increased armament, the further strengthened Ar 196A-3, and ultimately the Ar 196A-4 and A-5 with improved radio. Production of many of these was undertaken in France and the Netherlands. 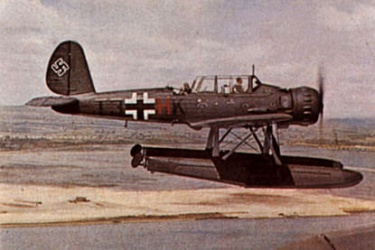