The Messerschmitt Me 262 Schwalbe (Swallow) was the world's first operational jet fighter and the pinnacle of German wartime aircraft design. It entered service shortly before its British counterpart, the Meteor, in July 1944 and it was quickly pressed into front-line service given the need to stem the Allied onslaught after D-Day. With its characteristic swept wings, the Me 262 was considerably sleeker than its piston-engined counterparts and once airborne, it was practically invincible: although poor at turning, its speed and power more than made up for it. As P-51, Spitfire, and Tempest pilots would soon find out, the best chance they had to destroy a Me 262 was on the ground or during take-off or landing given its poor acceleration at low speeds. Unfortunately, Hitler's insistence that the Me 262 be designed as a fighter-bomber led to production delays, and by the time it entered service it was too late altered the outcome of the war. The potential of the Me 262 is evident in its success as a bomber destroyer: during a 1945 raid, one squadron of Me 262s engaged a US force of over one thousand bombers and escorts; 20 B-17s and 10 P-51s were shot down without the loss of a single Me 262. Had this aircraft been available in large numbers in 1943 it is likely that the bomber offensive would have been seriously compromised. A notable unit that flew Me 262s was the legendary JV 44 led by Adolf Galland whose pilots included some of the Luftwaffe's top aces. Highest scoring jet aces included Kurt Welter (20 kills), Heniz Bär (16), and Franz Schall (14). After the war, captured Me 262s were used for testing and evaluation by the Allied powers, where its technology would be adapted for future jet designs. It was also produced briefly in Czechoslovakia since production facilities had been installed before the war ended.

Design of the Me 262 began as far back as 1938 but the first jet prototype, the Me 262V3, made its first flight only on 18 July 1942 because of delivery problems with the Junkers Jumo jet engine (which suffered from chronic reliability issues throughout its service life). The main fighter variant was the Me 262A-1a with bad weather (A-1a/U2) and recon versions (A-1a/U3) also built whereas the bomber variant was known as the Me 262A-2a Sturmvogel (Storm Bird) with up to 1,000 kg of bombs. The Me 262B series was designed with a tandem two-seat configuration for training duties as well as night fighting which was the case of the the Me 262B-1a/U-1 which saw limited combat. Czech variants that were produced post-war by Avia were known as the S-92. 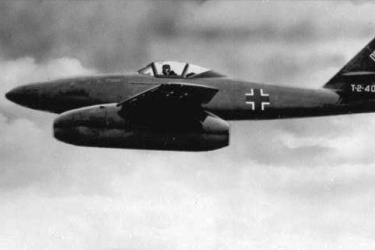