The gigantic Blohm und Voss Bv 222 Wiking (Viking) had originally been designed for transatlantic passenger service for Lufthansa, featuring a massive total of six engines mounted on huge shoulder wings it was by far the largest flying boat to see service during the war. Its other major distinguishing feature was the huge height-to-beam ratio which would give it an even greater impression of size. Overall the Bv 222 had some pretty impressive features including good speed, 28 hours of endurance, and massive defensive armament which even had remotely operated turrets in the wings. However, the huge manufacturing problems of producing an aircraft of this size, complemented by rather unreliable engines made it not as successful as intended and many were shot down by Allied fighters. Still, the Bv 222 served with distinction during the North African campaign where they would be found ferrying supplies to beleaguered German troops as well as performing radar-equipped reconnaissance missions in the Baltic, Atlantic and North Sea. Only four of these behemoths survived the war, two of which were sent to Britain and the US for trials and the others scuttled.

First flight of the civil transport Bv 222V prototype was on 7 September 1940, military versions would follow shortly after trials (the Jumo-powered non-military Bv 222B was never built). The principal Bv 222C variant featured FuG 200 Hohentweil and rear warning radars while production versions substituted the Bramo Fafnir radials for Junkers Jumo radials. A potential successor, the even larger Bf 238 was flown only as a prototype. 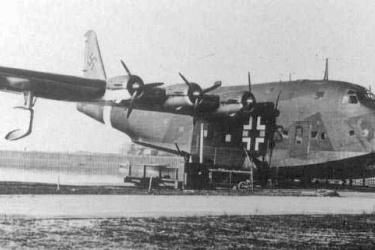