Britain has been at the forefront of military aviation from the start thanks to legendary designs like the Sopwith Camel, the Spitfire and the Harrier. Although its days as a global power are over, the Royal Air Force remains among the most modern in the world even though the country’s aviation industry is becoming increasingly intertwined with that of its European partners.

Britain, like all the other great powers, entered World War I with an unclear view of the future of air power, but gradually matched the German threat step by step with excellent designs such as the Sopwith Camel and even a burgeoning bomber force that was hitting German cities and factories by war’s end. British aviation technology maintained its position of prominence during the inter-war years and consolidated the Royal Air Force (the world’s first independent air force) as one of the most powerful in the globe. Although Britain, like France, suffered from financial problems in the lead up to World War II, it possessed what would become one of the finest aircraft in history (the Spitfire) and a growing faith in the doctrine of strategic bombing that would have tremendous repercussions once war was declared.

As the German blitzkrieg swarmed across Europe in 1939-40, it was the Royal Air Force that dealt the Germans their first strategic defeat in the Battle of Britain, the first and only time in history that a major military campaign was decided entirely in the air. This battle, forever immortalized in national lore, saw hundreds of Hurricanes and Spitfire defend the island against the German onslaught and prevail against the odds over the hitherto invincible Luftwaffe. From then on, the RAF grew stronger, building up a formidable Bomber Command tasked with bringing the war to Germany’s cities in what would be the largest air campaign in history, the strategic bomber offensive. Spearheaded by massive four-engined bombers like the Lancaster, the RAF mustered not just the brawn but also the brains to keep itself on par with whatever the Luftwaffe could throw against it: Britain’s bombers were more accurate at night that the US’s by day, and it was the first Allied country to field an operational jet fighter, the Meteor.

Despite ending World War II as arguably the second most powerful air force in the world, the RAF was forced to rapidly adjust to post-war austerity and downsize significantly. Still, it remained NATO’s second most powerful throughout most of the Cold War and was still capable of producing excellent indigenous designs like the Hunter and the Lighting which in many respects were superior to their US contemporaries. A powerful nuclear strike force composed of the trio of V-bombers was also built as was the world’s first vertical take-off jet, the Harrier. However the growing cost and complexity of aircraft in the supersonic era has forced British industry to make sacrifices, such as by adopting the F-4 Phantom in the 1960s (the first time in history that the RAF’s main fighter was foreign), and later, through collaborative efforts with other European nations to produce excellent designs such as the Tornado and the Typhoon. This trend is likely to continue in the decades to come.

There are currently 83 entries and data on 152 variants. 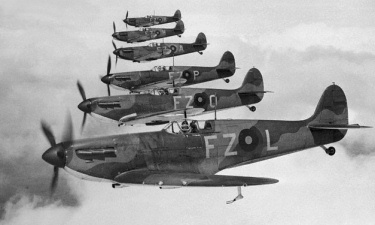 Immortalized for its role in the Battle of Britain, the Spitfire was still one of the finest fighters at war's end. 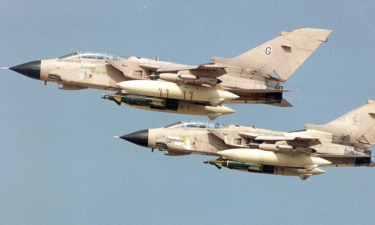 RAF Tornados made short work of Iraq's air defense network in the opening days of the Gulf War.