The Sukhoi Su-27 'Flanker' was the Soviet Union's answer to the new generation of US fighters which began entering service in the mid 1970's, notably the F-15 Eagle. Like the F-15, the Su-27 is designed for air superiority with only secondary ground-attack capability although subsequent models have shown that it is also a superb platform for that role. With its large swept wings, twin tails, and leading edge extensions, it resembles a larger version of the MiG-29 which was designed concurrently. However, it is optimized for beyond visual range combat and deep penetration thanks to its unrivaled range using just internal fuel and its ability to carry as many as ten air-to-air missiles. Perhaps its most impressive feature is its super-maneuverability, such as its ability to perform the famous "Cobra" whereby it can practically suspend itself in the air while turning nose-down to position itself on an opponent's six. This makes the Su-27 one of the most formidable dogfighters ever, particularly when paired with a helmet-mounted display and the off-boresight R-73E (AA-11) missile which was far more advanced than anything in the West during the final years of the Cold War. Like the MiG-29, the Su-27 featured an analog fly-by-wire system and also lacked a glass cockpit, although the latter was included in more modern variants. Avionics include an IRST sensor, a sophisticated ECM suite, and a simple but powerful Myech pulse-Doppler radar which has been gradually replaced by more capable multi-mode hybrid PESA/AESA models. The twin AL-31F engines provide considerable power, and were later modified for four-dimensional thrust-vectoring as well. Ground attack capability was limited in the original Flanker versions but was eventually implemented both through upgrades to older airframes as well as new designs like the multi-role Su-30 (described in separate entry) and Su-35, as well as the dedicated strike variant, the Su-34 (also described separately). Another adaptation which evidences the versatility of the Flanker design is the Su-33 naval variant, which currently operates out of Russia's sole aircraft carrier. Overall, the importance of the Flanker cannot be overstated: its introduction in the mid-80s leveled the playing field for Soviet aviation which during a stretch of time in the late 70s and early 80s had no match for US fourth-generation aircraft like the F-15 and F-16. Since then it has turned into Russia's most important fighter export with clients that include Algeria, Angola, Eritrea, Ethiopia, Indonesia, Kazakhstan, Malaysia, Ukraine, Uzbekistan, Venezuela, and Vietnam. Both China (known as the J-11) and India also have licenses to produce it domestically. Su-27s have been used by Russia for air defense duties in its wars against Chechnya and Georgia as well as its more recent intervention in Syria, but its only air-to-air combat has been with Ethiopian forces, which shot down 4 Eritrean MiG-29s (plus one damaged) in 1999-2000 with no loss of their own.

The prototype T-10 was first flown on 20 May 1977 and given the NATO code name 'Flanker-A'. It entered production in 1981 as the Su-27S 'Flanker-B' with the first units deployed to front-line squadrons in 1984. Variants of the basic Su-27 airframe include the Su-27UB 'Flanker-C' two-seat trainer, and the export-geared Su-27SK which features better ground-attack capability. This was improved further in the Su-27SM mid-life upgrade which added a glass cockpit, state-of-the-art navigation system, GPS, and additional ECM capability making the series true multi-role fighters (the similar Su-27SMK was an export-only variant). More recently, a further planned upgrade is known as the Su-27SM2 which incorporates some avionics and the new engine of the Su-35S (the Su-27SM3 refers to newly built aircraft rather than upgrades). A naval version is known as the Su-33 (prototypes known as the Su-27K). Entering service in 1994 on board the carrier Kuznetsov, the Su-33 features considerable air-to-ground capability and canards to improve maneuverability. Despite being initially preferred over the rival MiG-29K, the latter was chosen as a replacement in 2012. Starting in the late 1980s, a planned successor with a more powerful Bars radar, composite airframe, and canards became known in prototype form as the Su-27M, later redesignated as the Su-35 Super Flanker (the nearly identical Su-37 introduced thrust-vectoring). However, given Russia's precarious financial situation after the end of the Cold War, none were ordered nor were any exported. Over a decade later, some of these advances coupled with those of the Su-30 two-seat multi-role version (described separately), led to the Su-35S, the most modern Flanker variant currently in service. 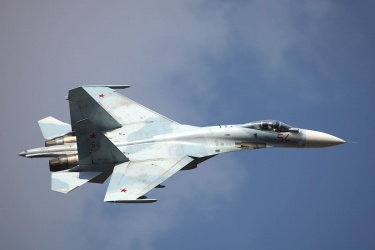