Built as a follow-up to the legendary MiG-21, the Mikoyan-Gurevich MiG-23 'Flogger' was a radical departure from previous Soviet aircraft design and overcame many of the inherent problems in its predecessor. The first and most obvious change is the new variable-geometry wing, the first in use with a Soviet fighter, as well as side inlets which allowed the incorporation of a search radar in its nose. In the beginning, this was the same 'Jay Bird' radar used in the MiG-21 which limited its effectiveness but was later replaced by the more capable Sapfir-23 when it became available. Eventually, the MiG-23 would feature proper beyond visual range (BVR) and look-down/shoot-down capability and would be armed with gradually more powerful air-to-air missiles. The MiG-23 also had some STOL capability and was seen as a rugged design though it suffered from handling issues, making it tricky to fly at certain angles of attack. Some of these issues were partly solved by making later variants lighter as well as adding structural features like vortex generators. Overall, however, the MiG-23's design lent itself for a variety of roles including an interceptor as well as a ground attack aircraft which would evolve into the MiG-27 (described separately). Like most Soviet aircraft, the MiG-23 entered widespread service among the USSR's allies and clients and remained a popular aircraft among third-world air forces given its cheap cost and relatively good performance. The MiG-23 saw action over Lebanon, Afghanistan, the Iran-Iraq War, the Gulf War as well as other smaller engagements where it has had mixed success: it has fared well against contemporaries such as the F-4 and Mirage F1 but fallen short against fourth-generation fighters like the F-14 and F-15. Post Cold War downsizing resulted in all Russian MiG-23s being retired from service by the mid-2000s though many linger on in foreign service to this day.

The prototype MiG-23 was first observed during the Aviation Day fly-by of 9 July 1967. Pre-production versions included the MiG-29S 'Flogger-A' and the slightly improved MiG-23SM but the first major variant was the MiG-23M 'Flogger-B' which introduced the more powerful 'High Lark' radar. Export versions included the considerably downgraded MiG-23MS 'Flogger-E' as well as the superior MiG-23MF which was geared for Warsaw Pact use though many were exported abroad as well. Later in the decade, an improved version was designated MiG-23ML 'Flogger-G' and featured a lightened airframe plus new radar and IR tracking systems, it was the most numerous fighter in Soviet service and was later complemented by the MiG-23MLD 'Flogger-K' with IFF, outboard underwing hardpoints and rear-warning radar. The ground-attack versions of the Flogger begin with the MiG-23B 'Flogger-F' series which were characterized by a recognizable duckbill nose housing a laser designator in place of the radome. These would lead to the MiG-27 and are described separately. Interceptor variants began with the MiG-23P 'Flogger-G' with improved avionics and datalinks with ground stations, while the MiG-23bis had an IRST and a HUD. Two-seat trainer variants included the MiG-23U 'Flogger-C' and MiG-23UB. 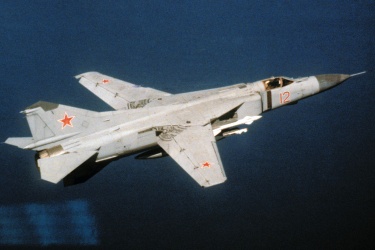