The Sukhoi Su-30 is a two-seat multi-role version of the Flanker which is Russia's first true 4+ generation aircraft and has achieved considerable export success. It was originally developed as a long-range interceptor, taking advantage of the basic Su-27's outstanding range and air-to-air capability. However, the end of the Cold War made such a role largely superfluous and as a result, the airframe was adapted into a multi-role fighter along the lines of the US F-15E. The Su-30 introduced numerous features that have since become standard on most other Flanker variants, including a glass-cockpit, Bars radar, a more sophisticated ECM suite, thrust-vectoring nozzles (on some variants), and a much heavier payload as well as the ability to carry most Russian-made air-to-ground ordinance. Most versions also feature canards for greater stability and as a result retain the super-maneuverability of their predecessors despite their greater weight, although at the cost of a slight decrease in speed. Initially, most Su-30 orders were for export, with the main variants going to China, India, Algeria, and Malaysia, but it has also been ordered by Angola, Belarus, Indonesia, Kazakhstan, Uganda, Venezuela, and Vietnam. Having recovered from its financial distress in the 1990s, Russia has also begun adopting the Su-30 in large numbers and has used it in combat during its intervention in Syria.

The prototype Su-27PU was adapted from the twin-seat Su-27UB trainer and first flew on 31 December 1989, although a demonstrator had flown two years earlier. Redesignated Su-30 'Flanker-C' it entered service in very limited numbers (just five aircraft) with the PVO and was offered for export as the Su-30K. The first multi-role variant was the Su-30M with the basic export variant known as the Su-30MK. This was offered to customers with considerable flexibility in terms of equipment and avionics, in the latter case both local and Western. Export variants included the Su-30MKK 'Flanker-G' for China (easily distinguishable by the lack of canards), the Su-30MKI 'Flanker-H' for India which introduced thrust-vectoring, the similar Su-30MKA for Algeria, and the Su-30MKM for Malaysia. A more modern version of the Su-30MKK is known as the Su-30MK2 for China but is also used by other countries. Later Russian variants include the Su-30M2 for combat training and the Su-30SM which is being procured in large numbers and includes most of the features of the MKI and MKM versions (such as thrust-vectoring) but with fully Russian avionics. 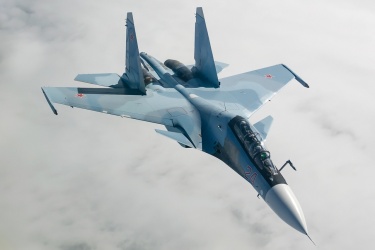