For a successor to the Su-24, Sukhoi opted for a development of the Flanker airframe which had hitherto proven to be extremely adaptable to plethora of roles. The model chosen for conversion was the trainer variant of the Su-33 navalized fighter. The result was the Su-34 'Fullback' (also known as the 'Strike Flanker', 'Platypus', or'Duckbill') which is immediately noticeable by a widened nose housing a side-by-side crew configuration similar to that of the Su-24 with the added comfort of a galley and toilet behind. Designed for low-level penetration, the Su-34 has an advanced terrain-following radar and nav/attack radar as well as a modern cockpit with multi-function displays and an inflight refueling probe. Like the naval versions of the Su-27 and the Su-35, it also has prominent canard foreplanes which allow for better maneuverability; despite its greater weight it retains much of the agility of the standard Flanker fighter. For ground attack, the Su-34 can carry the entire arsenal of Russian air-to-ground ordinance including laser-guided bombs, stand-off missiles and cruise missiles, as well as tactical nuclear weaponry. The Su-34 is not optimized for air combat, but nevertheless has a rear-warning radar installed in the tailcone which as an added surprise can direct a rearward-facing AA-11 missile to an enemy behind it. Deliveries of the Su-24 began in 2011 and production is set to intensify over the coming year in order to replace the Su-24 by 2020 in Russian service, albeit in reduced numbers given the aircraft's greater capabilities. Although it has not been confirmed, it is rumored that pre-production Su-34s were active in the 2008 war against Georgia. Production aircraft, however, have been very active over Syria, undertaking airstrikes from local bases as well as from Iran. 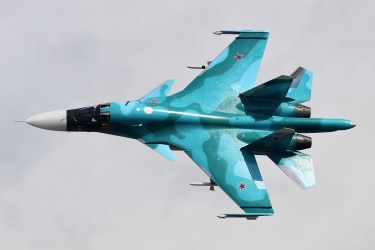