With the end of the Cold War, China and Russia's rapprochement meant that the old practice of license-producing the latest Russian aircraft would continue, this time around the Su-27 which in China would be known as the Shenyang J-11 'Flanker'. The J-11 is the first Chinese aircraft to compete against any Western fourth-generation fighter and single-handedly gives the PLAAF an enormous boost in air-to-air combat capabilities as it serves alongside Russian-built Su-27s and Su-30s also in the inventory. As production of the J-11 has matured, more indigenous Chinese components have been installed with plans for even more local content to be included such as the latest Chinese weaponry and avionics giving them true multi-role capability and a demonstrable advangage compared to the original Russian-designed units. According to sources, a naval version is also on the drawing board.

Plans for co-production of the Su-27SK began in 1995 with the first J-11 built three years later. Given the limited strike capabilities of the J-11, plans for an improved multi-role variant with more indigenous components and weapons, the J-11B, began in 2002. Lastly, a navalized version similar to the Su-33 is speculated to be underdevelopment under the designation J-11C. Further production of the J-11 is in question given China's intentions to purchase a large number of the advanced Su-30. 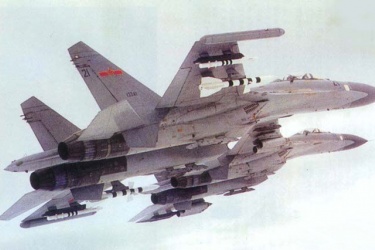