The Shenyang J-8 'Finback' is China's first completely indigenous jet design, developed without outside assistance despite the fact it is heavily based on the J-7/MiG-21 and originally intended to be able to intercept contemporary US bombers like the B-58 and F-105. Of relatively simple design, it nevertheless was a marked improvement over its predecessor, offering greater performance is nearly all aspects. It was also easily upgradeable with later versions offering all-weather interception and ground-attack capabilities thanks to a redesigned airframe which had a pair of lateral air-inlets and a nose mounted radar. The J-8 is currently in service in large numbers with both the PLAAF and the PLNAF and gained notoriety when one such aircraft collided with a US EP-3 south of China leading to an embarrassing diplomatic incident between both countries. It is also used for tactical reconnaissance and, unlike its popular predecessors, has not been exported to this date.

The J-8 prototype was first flown on 5 July 1969 and entered service in limited numbers as the J-8 'Finback-A' before being upgraded with a new avionics and weapons fit which resulted in the J-8I and J-8E (plans to equip early versions with US avionics were cancelled after the Tiananmen Square massacre). Later, the J-8II 'Finback-B' emerged as a significant modification of both airframe and systems which finally gave the aircraft true multi-role and all-weather capability making it comparable to early 4th generation fighters. Further improvements led to the J-8IIM which is being offered for export as the F-8IIM, these feature a new Russian-made pulse doppler radar, more powerful engines plus a modern cockpit with HOTAS controls. Other versions include the J-8D with an in-flight refuelling probe and the JZ-8 for reconnaissance. 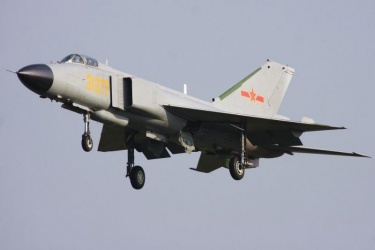