Despite the fact it was developed considerably later, the Chengdu J-10 'Firebird' (also known as the Vigorous Dragon) is roughly equal to most 4th generation fighters in serivce around the world and has the distinction of being China's first domestic aircraft built for multirole missions. It shares more than a passing resemblance to the US F-16 despite the fact that it is designed with a delta wing and large canard foreplanes, this is in no small part due to technology cooperation with Pakistan (who operates the F-16) as well as the Israeli Lavi project which Chengdu inherited. The result is an aircraft optimized for both air-interception and ground attack roles while providing superb maneuvrability, a wide range of weaponry and an advanced cockpit design featuring LCD displays and HOTAS controls. The J-10 entered service in late 2005 with possible upgrades including thrust-vectoring engines and a likely export destination in Pakistan, its top-secret nature was also unveiled in late 2006 after it was officially de-classified by Chinese authorities and shown in public.

The J-10 program has always been shrowded in secrecy, what little is known of its development indicates that the first prototype likely flew sometime in 1998, more than ten years after the program was started. A planned upgrade is known as the J-10C and features more powerful thrust-vectoring engines and a passive phased-array radar. Export versions are designated FC-10. 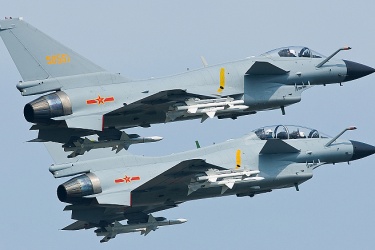