Perhaps the most representative aircraft of the Cold War, the Mikoyan-Gurevich MiG-21 'Fishbed' has been produced in higher quantities than any other supersonic aircraft ever. The MiG-21 was first seen as early as the mid-1950s and quickly became the mainstay of the Soviet fighter force as well as those of its allies and clients where it was still found in reduced numbers well after the fall of the USSR. Cheap and simple to build, the MiG-21 is characterized by its mid-mounted delta wings and a nose housing the air intakes of the single R-25 turbojet. In contrast to its predecessors, however, it incorporated a nose cone housing various types of radar, none of which were as sophisticated as their Western equivalents but which helped improve its air combat capabilities. Its other main attributes were a light airframe, excellent agility and low cost operation, however, this was contrasted by short range and limited payload. Its low cost, nevertheless, made it an export favorite, and the MiG-21 has been seen in the air forces of 47 nations in the Warsaw Pact and the third-world (other than the USSR, its major operator was China who's local version is known as the J-7). MiG-21s saw combat in the various Arab-Israeli wars, in the India-Pakistan conflict, and in Vietnam where they were among the most formidable enemy aircraft encountered and caused considerable casualties among US aircraft particularly at a time when many of these lacked fixed armament. Over the course of the war, MiG-21s shot down more F-4s than any other Vietnamese fighter, and it was also the only aircraft that could fly high enough to intercept B-52s. Nguyen Van Coc was credited with as many as nine kills flying the MiG-21, with numerous other Vietnamese pilots achieving ace status with this aircraft. By the late 1970s, however, it would be completely outclassed by newer US fighters like the F-15 and F-16 which took a huge toll over Lebanon and during the Gulf War. In spite of its obvious obsolescence, it remained a front-line dogfighter in Soviet service until the end of the Cold War by which time it was promptly retired. Many continued in service in former Warsaw Pact and third-world air forces, some which were upgraded with Western avionics and continue to fly to this day.

First flight of the MiG-21 is believed to have taken place sometime in 1955 and was shown in public during the Soviet Aviation Day display in June 1956. The first major production variant was designated MiG-21F 'Fishbed-C' which was also built in Czechoslovakia, it had rudimentary air-to-air capability in the form of the AA-2 air-to-air missile and an R-11 afterburning engine. A second generation all-weather interceptor variant was known as the MiG-21PF 'Fishbed-D', this differed from its predecessor by housing a larger center-body for a R1L 'Spin Can' search/track radar and was exported as the MiG-21FL; as was the trend at the time these aircraft were not equipped with cannon as it was believed that air-to-air missiles would suffice in the battlefield. Slight modifications later led to the MiG-21PFM 'Fishbed-F' (exported as the MiG-21PFS) which had minor structural changes, fixed cannon, and an R2L radar; these were then followed by the MiG-21S 'Fishbed-J', a true multi-role variant with two extra underwing pylons and an RP-22 'Jay Bird' radar which added the ability to carry AA-2 missiles. Its successor was the MiG-21SM (exported as the MIG-21M) with a more powerful engine but most notable was the MiG-21MF which combined the improvements found in the previous two versions and had use of titanium alloys to lighten its structure. The third and final generation of the MiG-21 is the MiG-21bis 'Fishbed-L'. It comes with improved construction and updated avionics and later, in the 'Fishbed-N', was given a new R-25 turbojet with a two-stage afterburner and reduced fuel consumption. The most identifiable feature of this variant is the the large antenna which protrudes below the cockpit. Alternative variants of the MiG-21 include the MiG-21R 'Fishbed-H' tactical reconnaissance aircraft and the MiG-21U 'Mongol' two-seat trainer with tandem cockpits while a number of lesser interim and export versions were also built. 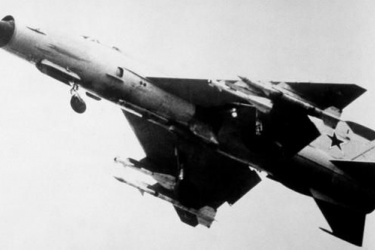