Based on the MiG-21, the Chengdu J-7 'Fishbed' followed the Chinese practice of locally-producing most major Soviet designs up until the Sino-Soviet split. The first series of aircraft were built under license although after relations deteriorated the Chinese were forced to reverse-engineer most subsequent variants, as was typical at the time most initial units were of poor quality which forced a number of suspensions especially during the Cultural Revolution. Large-scale production resumed afterwards with improved variants entering service and many others destined for export with the option of including Western avionics as well as other advanced features, giving them a significant boost in capability at a fraction of the cost of modern fighters. J-7s have been exported to Bangladesh, Egypt, Iran, North Yemen, Burma, Somalia, Sudan, Zimbabwe and Pakistan and various hundreds still serve with the PLAAF and PLANAF despite being obsolete.

First flight of the J-7 (based on the MiG-21F-13) was achieved on 17 January 1966 and entered service as the J-7I one decade later due to production delays. The improved J-7II (or J-7B)was also developed during this time and included features from the MiG-21PFMA such as more powerful engines and avionics. Further enhancements led to the J-7E which has since replaced earlier versions of the J-7 in PLA service, on the other hand a planned copy of the MiG-21MF known as the J-7III (or J-7C) failed to meet expectations and was produced in minimal quantities. The most recent Chinese variant is the J-7G which is expected to breathe new life into this venerable fighter in the years to come. Export versions of the J-7 are known as the F-7 and generally share the same variant letter as their Chinese counterparts although some exceptions are the F-7M Airguard and the F-7P Skybolt for Pakistan both of which are heavily equipped with Western avionics and control systems plus an increased range of weapons (another more recent export variant, the F-7MG, is based on the J-7E). Finally, a two-seat trainer is known as the JJ-7. 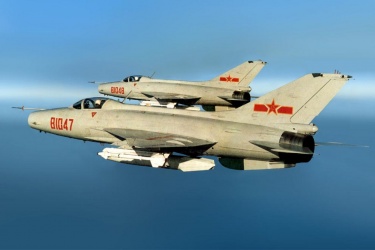