The AMX-VCI (Véhicule de Combat d'Infanterie) was developed from the AMX-13 light tank in the 1950s, to serve as the French Army's main troop transport. The chassis is broadly similar to that of the AMX-13, but the hull has been redesigned to accommodate a troop compartment capable of carrying 10 troops who can dismount through two outward-opening doors in the rear hull (six firing-ports are provided, two on the rear doors and the others on the hull sides). Initial production units lacked NBC protection but this was later added to ensure greater survivability. However, the AMX-VCI's main drawback was the lack of amphibious capability, which was the main reason for its eventual replacement by the AMX-10P. There were substantial export orders, including NATO partners Belgium and the Netherlands, as well as Argentina, Ecuador, Indonesia, Lebanon, Mexico, Qatar, Sudan, Venezuela and the UAE. Of these, only Lebanon has used it in combat during its 1980s civil war.

The initial prototype was completed in 1955 and entered service with the French Army two years later as the AMX-TTC, and later renamed AMX-VTP and AMX-VCI. A major upgrade programme led to the AMX-VTT Version 1987 in a new engine, an automatic transmission and hydropneumatic suspension. Aside from this, most other variants have been designed for non-combat support roles including the VTT/TB ambulance, the VTT/PC command post, the VTT/Cargo capable of carrying a 3,000 kg load, the VTT/LT fire control vehicle, the VTT/RATAC radar platform, the VTT/VCA artillery support vehicle, and the VTT/PM 120-mm mortar carrier. 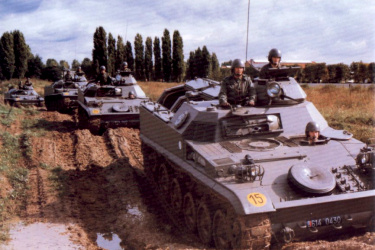