The AMX-10P has been the French Army's standard infantry fighting vehicle since the 1970s, and one of the first to be fielded by NATO forces. Intended as a replacement for the AMX-VCI, it features a standard layout for a tracked IFV, with the driver and engine compartments up front, behind which sits a two-man turret housing a 20-mm M693 autocannon. Up to eight troops can be carried in the rear compartment, accessible through a power-operated ramp with two firing ports (there are none on the sides). Like most IFVs, protection is limited to small arms and shrapnel, although frontal armor is slightly stronger and can protect from anything up to 23-mm rounds. It is also fully amphibious and features NBC protection. The AMX-10 has been adapted for numerous other uses, including anti-tank and mortar platforms and incremental upgrades have been widely available to both French and foreign users. Export customers include Greece, Indonesia, Iraq, Qatar, Saudi Arabia, Singapore and the UAE. In French Army service, it is being gradually replaced by the VBCI.

The first prototypes of the AMX-10P were completed in 1968 and it entered service with the 7th Mechanized Brigade at Rheims in 1973. Aside from the basic IFV version, there is a dedicated marine version (AMX-10P Marines) with more advanced amphibious capabilities, designed for service in Indonesia and Singapore, and some feature a new TS-90 turret with a 90-mm F4 gun. There is also the AMX-10 HOT anti-tank missile platform featuring a new turret with a quad-missile launcher, the AMX-10 PC command vehicle, and AMX-10 TM mortar tractor. Specialized artillery variants include one with fitted with a RATAC artillery radar, the AMX-10 SAO, AMX-10 SAT, and AMX-10 VAO observation and survey vehicles, as well as the AMX-10 SAF fire-control system. Ambulance and repair vehicles (AMX-10 ECH) have also been designed. A wheeled (8 x 8), reconnaissance vehicle known as the AMX-10RC is described in a separate entry. 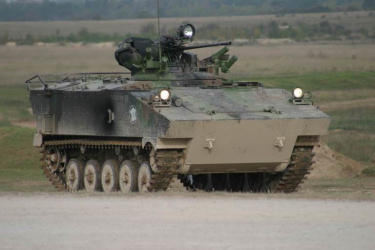