Design of the AMX-13 began shortly after the end of World War II where it was intended as a fire support platform for airborne units, but ultimately became the standard light tank for the French Army. The AMX-13 was unique due to its incorporation of an oscillating turret as well as an automatic loader which kept crew size to just three. Initial versions of the AMX-13 were fitted with a 75-mm gun, but this was later up-gunned into 90-mm and 105-mm versions, the latter case mostly for export. Among the tank's drawbacks, however, was that the small size of the oscillating turret forced a height limit among crew members, and also limited the amount of ammunition readily available to just 12 rounds, thus requiring the crew to physically dismount and reload. Due to its low cost and reliability, the AMX-13 was successful on the export market, being operated by as many as 30 different countries and seeing frequent action during the Arab-Israeli and Indo-Pakistani wars. Its chassis was also the base for a plethora of other platforms, notably the VCI IFV as well as self-propelled howitzers.

The original Modèle 51 (AMX-13/75) was fitted with a 75-mm gun in an FL-10 turret. This was later revised to feature a more powerful 90-mm F3 gun in the Modèle 52 (AMX-13/90). An export version is known as the Modèle 58 (AMX-13/105) with a 105-mm gun mounted on a FL-12 turret, capable of firing the same ammunition as the AMX-30 MBT. Some were fitted with a FL-15 turret with extra optical equipment and periscopes. The last major French variant was the Modèle 1987, with additional armor, mobility and firepower improvements as well as a revised hull, a hydropneumatic suspension replacing the previous torsion bars, and a diesel engine. Private upgrade options are also offered. Other variants include 105-mm and 155-mm self-propelled howitzers, the AMX-VTT and AMX-VCI APCs, as well as anti-aircraft and anti-tank missile platforms, armored recovery vehicles and bridgelayers. Export customers have performed numerous local modifications as well, most notably the Singaporean AMX-13 SM1 with new engine, transmission, electrical system and suspension which give it faster speed and greater range. 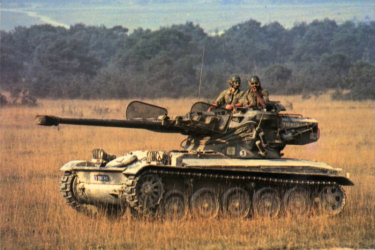