The Lorraine 37L was a tracked carrier that was designed to replace the Renault UE carriers then in service. Largely similar to the Carden-Loyd Mk VI machine-gun carrier, the Lorraine 37L was designed with the transmission located at the front of the vehicle, behind which sat the driver and commander. The engine compartment was located in the center of the hull while the rear hull was occupied by the cargo area. The main role of the Lorraine 37L was as an ammunition carrier that could tow either a second ammunition carrier or a fuel trailer. These were designed for use in the French Army's armored divisions; a surprisingly forward looking attempt to provide mobile units with ample logistical support. However, an armored fighting vehicle was also developed shortly before the German invasion. Following the fall of France, the Germans took over surviving units and put them to extensive use, notably as a self-propelled artillery platform, as well as an anti-tank platform with various different types of armament. Production continued during the German occupation (disguised as a forestry tractor) and were used as AFVs during the Allied drive to liberate France in 1944. Many remained in service after the war before being replaced by more modern vehicles like the AMX-VCI.

A requirement for a new tracked carrier was issued in the early 1930s and Societé Lorraine was given a production order 1936 for its Chenillette Lorraine 37L (Tracteur de Ravitaillement pour Chars). An AFV variant was known as the Lorraine 38L VBCP (Voiture Blindée de Chasseurs Portés). In German service, the vehicle was known in its basic version as the Lorraine Schlepper (f) but it was then adapted for use as a self-propelled artillery platform for the the 15cm sFH and 10.5cm leFH 18 howitzers. An initial anti-tank conversion was equipped with 4.7cm PaK 181 gun, but with a more powerful 7.5cm PaK 40/1 it became known as the Marder 1 (SdKfz 135) which is described separately. Captured versions by the Allies and Free French were also put into use, with some late-war versions being equipped with a Hotchkiss machine-gun. 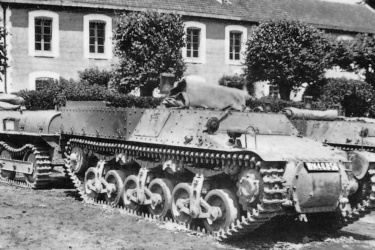