The Mikoyan MiG-29 'Fulcrum' was the Soviet Union's first fourth-generation fighter to enter service. Developed in the late 70's, it was the USSR's answer to the latest US lightweight fighters like the F-16 and the F/A-18 which it greatly resembles especially due to the large leading-edge root extensions. Overall the MiG-29 is small, fast, and extremely maneuverable, and when armed with the deadly AA-11 'Archer' short-range AAM combined with a helmet-mounted sight was widely considered to be arguably the finest close-combat dogfighting fourth generation aircraft. Another key feature was an IRST system that allowed for passive targeting. On the downside, combat range and radar coverage was weak, and engine smoke as notorious. Only in later versions were in-flight refueling systems as well as HOTAS controls and modern glass cockpits installed. Ground attack capability was also limited, making it unable to be used as a multi-role aircraft. Overall, its attractive price tag made it a favorite for export during the late Cold War period: it is in service with many countries including most former Warsaw Pact and CIS members as well other Soviet client states (former East German units were taken over briefly by the Luftwaffe and tested against NATO fighters where their short-range capabilities were praised). It's combat record has not been great, however, suffering at the hands of US F-15s and F-16s during the Gulf War and the Yugoslavian conflict. After the end of the Cold War, preference for the more capable (but more expensive) Su-27 left the MiG-29 out of favor although numerous upgrades were developed, including a navalized variant. Many of these corrected the original version's deficiencies and as a result, the Fulcrum has gained a new lease of life in recent years. As such, the MiG-29 will continue to be one of the most popular aircraft in the world well into the 21st century: it is currently the Soviet/Russian aircraft with most foreign users.

The MiG-29 was first flown on 6 October 1977 and the initial production variant, the MiG-29 'Fulcrum-A' (9.12), began equipping Soviet units in Europe in the mid 80's. It features a 'Slot Back' pulse-Doppler radar with look-down/shoot-down and track-while-scan capability while other avionics include a laser rangefinder, an IR seeker/tracker (something not found in most US fighters) and a helmet-mounted target-designation system which enables it to achieve a lock-on even when the aircraft is not facing its target. Some of the MiG-29's drawbacks were corrected in the MiG-29S 'Fulcrum-C' (9.13) with a more powerful N-019M radar which can track 10 targets and engage 2 simultaneously (greater ground-attack capability was added in the MiG-29SM). A dorsal hump with extra fuel was added to this version and has been standard since. Its two-seater trainer variant is known as the MiG-29UB 'Fulcrum-B'. Eventually, a much improved version of the Fulcrum was designated MiG-29M 'Fulcrum-E' (9.15) (or MiG-33) which included more powerful engines and an analog fly-by-wire system as well as a considerably revised airframe, for export. It can also carry a larger variety of armament including SEAD weaponry. An upgrade of existing MiG-29s to this standard is known as the MiG-29SMT (9.17). A similar naval version is known as the MiG-29K and also includes in-flight refueling but development was initially canceled in favor of the navalized Su-27 (Su-33). This has since been reversed and now will actually begin replacing the Su-33. The final and most modern version is the MiG-35 Fulcrum-F which is not yet in service. This variant features new avionics and equipment including an AESA radar. A two-seater version is designated MiG-35D. 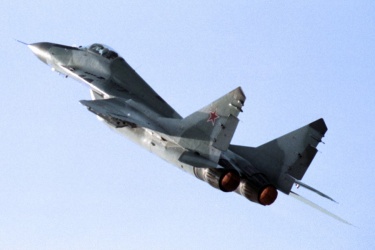