The Lockheed Martin F-35 Lightning II is the result of the most expensive military procurement program in history, estimated to end up costing as much as $1.5 trillion, for an aircraft that will become the main tactical aircraft for all four branches of the US military as well as to numerous NATO and non-NATO US allies. In US service, it will replace the F-16, AV-8 and legacy versions of the F/A-18 and was originally considered to replace the A-10 as well. Developed in collaboration with Northrop Grumman and the UK's BAE Systems as part of the the Joint Strike Fighter program, the F-35 shares various common features with the F-22 and as such resembles a scaled down version of the Raptor: it has a mid wing configuration with twin outward canted tailfins, internal weapons bays to preserve its stealth aspects (additional weaponry may be carried externally when stealth is not a mission requirment), and STOVL capability via a lift fan for USMC/RN units. Unlike the F-22, however, the F-35 is a true multi-role aircraft and is therefore optimized also designed for ground attack and configured to carry most weapons in the US arsenal, as well as that of European and Israeli origin. Avionics are centered on the advanced AN/APG-81 AESA radar, a successor to the one installed on the F-22 with added air-to-ground modes and retaining the advanced electronic warfare capabilities. The F-35 also features an Electro-Optical Targeting System (EOTS) under the nose, which is the equivalent of an integrated Sniper pod. The revolutionary cockpit design features a single glass touchscreen and a speech-recognition system. This is complemented by a helmet-mounted display. The result is the first modern aircraft to not require a HUD. Another unique element of the F-35 program is the maintenance system, which will involve a number of global facilities. However, this has proven controversial, as it means many air forces will have to send their aircraft across borders to a few select hubs (so far, the UK, Netherlands, and Australia have been selected) for repairs. Despite these arrangements, the F-35 has so far been an export success, being ordered by Australia, Denmark, Israel, Italy, Japan, Netherlands, Norway, South Korea, Turkey, and the UK.

Maiden flight of the demonstrator models of the X-35 took place in 2000 with the first production model flying on 15 December 2006. It was developed in competition with the Boeing X-32 for the Joint Strike Fighter Program. Three different versions of this aircraft are being built: the F-35A is a conventional take-off variant set to replace the F-16 and is also the only version of the F-35 with fixed armament. It will account for the bulk of US and foreign orders. The F-35B is a STOVL variant for the USMC as well as the Royal Navy and Italian Navy, and is designed to replace the venerable Harrier. Finally the F-35C is a navalized variant for the USN with larger folding wings and stronger landing gear to replace F/A-18Cs. 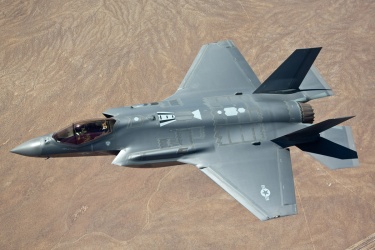