Immortalized in the movie Top Gun and last in the legendary series of Grumman "cats", the F-14 Tomcat served as the US Navy's first line of defense for over three decades. It was born out of the failure of the F-111B, a navalized version of the USAF's swing-wing fighter optimized for fleet defense, which in turn led to the VFX program for a new naval interceptor capable of shooting down Russian missle bombers (like the Tu-22M) at a distance. The F-14's swept-wing configuration allowed it to alternate between fast supersonic speeds and slower, more maneuverable speeds for close-range dogfighting. The tandem-seat cockpit for pilot and a radar intercept officer (RIO) in the rear. The aircraft was built around the then-new AIM-54 Phoenix long-range missile capable of destroying targets up to 150 miles away, while its AN/AWG-9 radar could also track up to 24 targets simultaneously and engage six at the same time. Early Tomcats were fitted with an undernose IRST sensor but these were later replaced by a television camera set in order to allow target identification at longer ranges. The development of the TARPS pod added reconnaissance capability to the aircraft, while later variants also gave them ground-attack capability, which was originally lacking. The F-14 entered service in the final years of the Vietnam War, providing air support to the US evacuation in 1975. However, its first taste of combat came in 1981 when they engaged and destroyed two Libyan aircraft in the Gulf of Sidra. A similar scenario was repeated in 1988 and these accounted for the only four air-to-air F-14 kills in USN service. Tomcats provided air support during the Gulf War and (later), ground attack during the Afghanistan and Iraq wars, after which they were retired in 2006 in favor of the F/A-18E/F. The only export customer of the Tomcat was Iran, which bought 79 units before the Shah was toppled in 1979, a few of which remain serviceable today. Iranian units distinguished themselves well during the 1980-88 Iran-Iraq War, with an estimated 130 kills which would give the Tomcat the highest number of air combat victories among all US teen-series fighters. Three out of Iran's four aces were Tomcat pilots: Jalil Zandi (11 kills), Sharhram Rostami (6) and A. Afshar (6).

The first F-14A was first flown on 21 December 1970 and was initially deployed on carriers in 1974. Despite being developed in the 1960s, its AN/AWG-9 multi-mode radar is still among the world's most powerful, a testament to the level of technological sophistication required of this aircraft. Unfortunately the F-14A suffered teething engine troubles and improvements led to the F-14A+ (later redesignated F-14B) which incorporated a new F110-GE-400 powerplant. Further upgrades resulted in the F-14D Super Tomcat, this variant featured a new AN/APG-71 radar as well as considerable ground-attack capability including laser-guided bombs and JDAMs but no stand-off missiles. Both F-14Bs and Ds were either new production aircraft or remanufactured F-14As. F-14s that were fitted with targeting pods were informally known as 'Bombcats'. 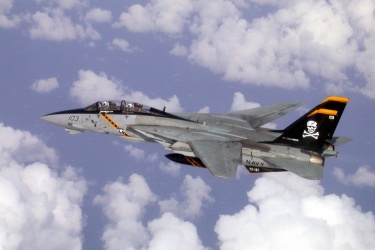