The German navy evolved from a mere coastal force into a mighty dreadnought fleet that came close to challenging British naval supremacy during World War I. However, it is the submarine that has become the most iconic representative of the country's naval power in the two world wars, coming close in both occasions to denying the Atlantic to the Allies.

Germany did not have a tradition of naval power until well after its unification in the 19th century when it became apparent that its global ambitions could not be attained through its army alone. Thanks to the leadership of Admiral Tirpitz, the German navy embarked on a process of expansion that would directly challenge the primacy of the Royal Navy. By the start of World War I it was the second largest in the world but this was still not big enough to challenge the British one-on-one. However, the British blockade made it necessary to eventually seek combat; this happened in July 1916 during the Battle of Jutland, a daring plan to fight the Royal Navy in two separate engagements. The German High Seas Fleet performed well, sinking more British ships than it lost, but ultimately the battle did not prove decisive and the dreadnoughts went back to port never to see action again. Another German naval weapon proved to be more threatening: the U-boat. Unrestricted submarine warfare nearly brought Britain to its knees in 1917 until US entry on the Allied side and the establishment of a trans-Atlantic convoy system defeated the threat from below.

After the armistice, the German battlefleet remained largely intact but was dramatically scuttled by its commanders while interned at Scapa Flow. The Versailles Treaty also imposed severe limitations on the German navy, including a prohibition to build submarines. These restrictions were gradually relaxed (or outright violated) after Hitler came to power, and a full program for naval rearmament was in place by the late 1930s. Unfortunately, World War II came to early and the overwhelming superiority of the Allied navies forced the Germans to resort to the U-boats once again. Millions of Allied tons of shipping were lost over the next few years and this time around, the Allies required a reestablishment of the convoy system, sonar-equipped ships, escort carriers and long-range maritime patrol aircraft to turn the tide in their favor. On the surface, the Germans were less successful. Despite the dramatic sinking of the pride of the Royal Navy, the HMS Hood, in a duel against the Bismark, most German surface ships found more success as commerce raiders in the face of vast British numerical superiority. The sinking of the Bismark's sister ship, the Tirpitz, in late 1944 effectively ended the German naval threat in Europe.

Germany's naval role within NATO during the Cold War was limited and focused mostly in the Baltic. It has remained an important developer of submarine technology: the diesel-powered Type 212s are widely considered the quietest ever designed thanks to an innovative fuel cell power system and a non-magnetic hull. In spite of Germany's economic and technological prowess, it is unlikely that the Bundesmarine will seek a return to great naval power status anytime soon.

There are currently 64 entries, data on 9 warship types, and 1,942 individual warships in the registry. 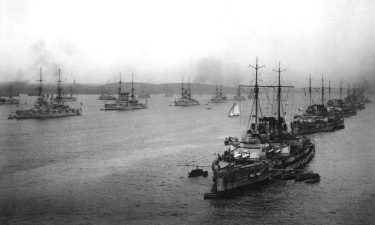 The High Seas Fleet was the answer to British naval dominance. 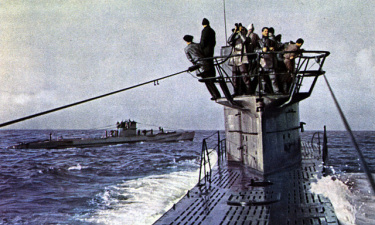 U-boats have been the quintessential expression of German naval might.