The Deutschland-class were some of the most feared ships in the pre-war years due to their combination of speed and power that made them known as 'pocket battleships' in the West. The Germans called them panzerschiffe or 'armored ships' but later redesignated them as heavy cruisers in 1940; they are perhaps best referred to as large cruisers. The class was designed (before the Nazis came to power) within the limits set by the Washington Treaty and thereby had a nominal displacement of just 10,000 tons although fully loaded they exceeded this by a considerable margin. Armament consisted of six 28-cm SK C/28 (11-in) guns in three twin batteries, considerably heavier than any contemporary cruiser. This was complemented by a battery of eight single mount 15-cm guns for secondary armament, as well as just three 8.8-cm anti-aircraft guns; like most ships, this was upgraded during World War II given the greater threat of air attack. Armor protection was somewhat light for a cruiser, with an 80-mm maximum belt (100-mm on the Admiral Graf Spee) coupled with torpedo bulkheads. However, significant weight gains were possible thanks to the use of welding rather than riveting on the hull, thereby saving as much as 15% of displacement. Further weight gains were achieved through the use of all-diesel propulsion which allowed for a maximum speed of 26 knots. The Deutschland class ships saw action for the first time in the Spanish Civil War and were heavily involved with the Kriegsmarine for the remainder of the war. Aside from the Admiral Graf Spee which was scuttled after the Battle of the River Plate, the other two ships survived until the last days of the war.

All three ships were deployed for patrols during the Spanish Civil War. Deutschland was renamed early in the war to Lützow due to fears that morale could be affected if a ship with that name was sunk. It later participated in the invasion of Denmark and Norway, as well as further operations against Arctic convoys. It was sunk by RAF bombers while on port in 1945. The Admiral Scheer was an extremely successful commerce raider in both the Atlantic and the Indian Oceans, sinking more tonnage than any other raider. It was later used against Arctic convoys but was also sunk by RAF bombers before the war's end. The Admiral Graf Spee was sent early in the war to the South Atlantic against Allied shipping. It was intercepted by a Royal Navy cruiser fleet and damaged in the Battle of the River Plate in December 1939. Believing a more powerful British force was near, it was scuttled in Montevideo. 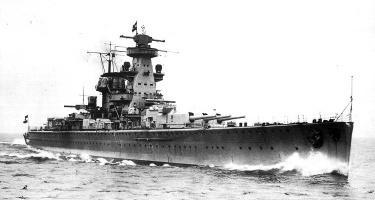