The Type 90 main battle tank was Japan's answer to the new batch of third generation tanks appearing in the US and Europe in the 1980s, which quickly made the Type 74 obsolete. The Type 90 incorporates a license-produced version of the Rheinmetall 120 mm smoothbore, the same gun used in the German Leopard 2 as well as later versions of the US M1. Although details are classified, it is believed that the Type 90 utilizes composite armor for protection, compared to the welded steel of its predecessors. Aside from that, the design of the Type 90 is largely conventional and is clearly inspired by early versions of the Leopard 2, particularly the turret which features vertical front and sides and a long bustle that extends over the engine compartment. However, dimensionally it is smaller. In contrast to previous Japanese tanks, however, the Type 90 features an auto-loader. Fire control and optical equipment are largely of domestic origin (as are all sub-systems aside from the gun), and like all post-war Japanese tanks, features a diesel engine. NBC protection is provided as well, and it can carry a dozer blade at the front when needed. The Type 90 has gradually replaced the Type 61 and 74 MBTs since its introduction in the 1990s, but is now in the process of being replaced by the Type 10. As is the case with all Japanese post-war weapons systems, it has not been exported.

Development of a third generation tank began in 1976, barely one year after the Type 74 entered production. The first prototype of the Type 90 was built in 1982 with a Japanese-designed 120-mm. This was replaced by the Rheinmetall gun in later prototypes built in the late 1980s, with production commencing in 1989 and the type formally classified in 1991. Variants include an Armored Recovery Vehicle with the same designation as well as the Type 91 AVLB scissors-type bridgelayer. 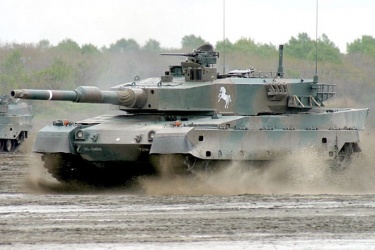