The Type 10 is the latest Japanese MBT, intended as a successor to the Type 90 and one of the most modern new designs in the world. As is the case with many 21st century fighting vehicles, the Type 10 incorporates the latest advances in modular armor technology enabling different degrees of protection depending on the mission profile. Armament consists of a locally-designed 120-mm smoothbore, built on the experience of license producing the similar caliber Rheinmetall gun used on the Type 90. This will fire both Japanese-designed as well as NATO standard ammunition. Perhaps the most important innovation, however, is the use of advanced C4I (command, control, communications, computers, intelligence) networking capability which allows the sharing of information among tanks as well as with regimental commanders. It is also capable of obtaining full speed in reverse thanks to a continuously variable transmission. Other innovations brought forward from the Type 90 include an active hydropneumatic suspension as well as entirely locally-designed sub-systems. Initial units entered service in 2012 and production is expected into 2015 at least.

The TK-X (MBT-X) was born out of the need to replace Type 74 and 90 tanks and an initial prototype was revealed in 2008. No variants of the basic Type 10 have so far been developed. 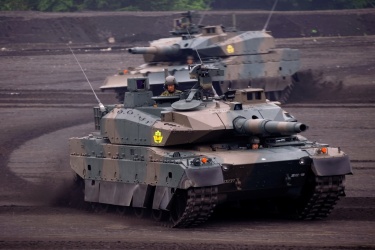