Following the development of the Type 61, the JGSDF saw the need for a more advanced main battle tank that would remain competitive against potential threats throughout the 1970s and 1980s. The result was the Type 74 which featured numerous advances compared to its predecessors that helped it narrow the capability gap with US and European designs. The Type 74 packed a far more powerful punch thanks to the use of the tried and tested British L7 105-mm gun, the same used on numerous NATO tanks including the Leopard 1, M60, and early M1s. Armor was also upgraded significantly although it remains classified. The Type 74 also featured a unique hydropneumatic suspension that enabled it to be lowered at the front and increased at the rear to improve the vehicles depression. This was a similar mechanism as that found on the Swedish S-tank (Strv 103) as well as the US/German MBT-70 prototype. Aside from that, the design was largely conventional compared to its contemporaries, and featured extensive locally-produced equipment including the laser rangefinder, ballistic computer and stabilizer. Deep fording capability was also added thanks to a schnorkel, as was NBC protection. Despite these advances, development was delayed and once the first deliveries were made in the 1970s, new and significantly more advanced NATO third-generation tanks were nearing completion. Eventually remaining Type 61 and 74 units were replaced by the more modern Type 90.

Design of a follow up to the Type 61 began in 1964 as the STB-1 with an automatic loader. This was removed in the STB-3 which was followed by the final STB-6 prototype before production of the Type 74 in 1975. Variants include the Type 78 Armored Recovery Vehicle and the Type 87 SPAAG armed with twin 35-mm Oerlikon KDA cannons. 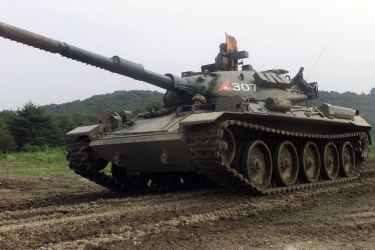