The Type 61 was the Japanese Ground Self-Defence Force's first post-war tank design, one that borrowed extensively from its US contemporaries, namely the M47 which it strongly resembled. The Type 61 featured numerous peculiarities which stemmed from Japan's unique requirements for a main battle tank, and the fact that the country generally lacked a tradition for armored warfare. First and foremost was the fact that the tank was undergunned by European standards, with a locally-produced 90-mm gun, but this was seen as sufficient for national requirements. The Type 61's weight was initially limited to just 25 tonnes but this was eventually revised upward in order to improve its armor protection which reached a maximum of 64 mm in a highly sloped glacis plate. Additionally, the tank was designed to accommodate smaller crew members compared to the US M4s and M24s that had been provided to the JSDF after World War II, while local armament production had been prohibited. Aside from that, the Type 61 featured a conventional layout with a torsion bar suspension, infra-red equipment and a diesel engine. The Type 61 was also small enough to fit inside Japan's many railroad tunnels. After its introduction in the early 1960s it became the standard JSDF tank before being superseded by the more modern Type 74 which was considerably more competitive compared to US and European designs of the 1970s.

Development for a new Japanese tank design began in 1954, and the first prototypes were ready by 1957 of which the ST-A4 was selected for production as the Type 61. Variants include the Type 67 Armored Vehicle Launched Bridge with a scissors-type bridge that unfolds forward, and the Type 70 Armored Recovery Vehicle. 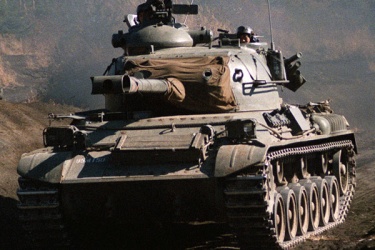