Developed from the Type 97 Chi-Ha, the Type 1 Chi-He was an attempt to improve the former's main deficiencies, mainly a gun that was inneffective against enemy armor. As a result, the Chi-He was designed with the newer Type 1 47-mm high velocity gun, which despite the smaller caliber than the Type 97's gun, had superior armor penetration. Additionally, the larger turret had space for a loader which reduced the workload for the crew. Aside from this, the design of the Type 1 was strongly related to that of the earlier tank, retaining the same chassis and suspension, albeit with a slightly longer and higher hull. The other main drawback of the Type 97 was its weak armor protection, and this too was improved in the Type 1 which essentially doubled the thickness while the sloped frontal plates were now welded rather than riveted. This increased weight but was offset by a more powerful engine. Despite its superior performance, production of the Chi-He was hampered by low priority given to tank construction as a result, only around 170 were built and saw little combat, most being relegated to defense of the home islands in preparation of a US invasion.

Development of the Type 1 Chi-He was undertaken directly from the Type 97 that it was intended to replace. No variants were built, but it served as the basis for the Type 3 Chi-Nu. 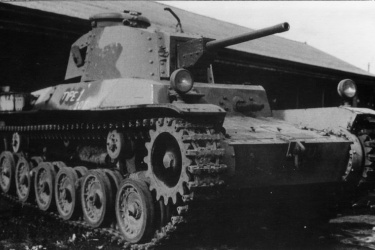