The Type 97 Chi-Ha was the most widespread medium tank in the Imperial Japanese Army's arsenal during World War II. Designed as a replacement for the Type 89B (Japan's first indigenous tank), featured numerous improvements that made it an adequately modern tank for the late 1930s. Armament consisted of a short-barreled Type 90 57-mm gun (the same used in its predecessor) mounted in a two-man turret that was noticeably offset to the right of the hull. Two sets of trunnions also allowed the gun to be traversed independently of the turret. Like most Japanese tank designs, the turret was also surrounded by a prominent radio frame aerial. Armament was relatively modest for a medium tank, at just 25 mm maximum but the asymmetric hull design (of both riveted and welded construction) gave it higher effective protection, but at the cost of a more difficult production process than would be the case with a more streamlined hull. The Type 97 Chi-Ha first saw action in China and against the USSR in the Khalkhin Gol conflict. AFter that they were used extensively US and British Commonwealth forces, initially with much success: it was more than capable of taking on the US M3, but was significantly outgunned by the M4, even after the original gun had been replaced by the high velocity 47-mm Type 1 that despite the lower caliber had better armor-piercing performance. In the later part of the war they were used mostly for static defense of captured islands, and some remained in use by Chinese forces (both nationalist and communist) in the Civil War.

An initial prototype for a new medium tank was built by the Osaka Arsenal and known as the Chi-Ni. This was followed by the Mitsubishi Chi-Ha, which was significantly heavier and also faster thanks to a more powerful engine. A variant with a high velocity 47-mm Type 1 gun was known as the Type 97 Shinhoto Chi-Ha and was the only other major tank version. There were a myriad of non-tank variants including a flail type mineclearing tank, bulldozer tank, bridgelayers, engineer and armored recovery vehicles (Se Ri, anti-aircraft vehicles, and command tanks (Shi Ki. The Type 38 Ho-Ro self-propelled howitzer was also based on the Type 97 chassis, as was the unconventional Ho-K ram tank, with a steel prow mounted at the front and the turret removed. Successors to the Type 97 included the Type 1-4 designs, most of which were built in small numbers or never passed the prototype stage (and are described separately). 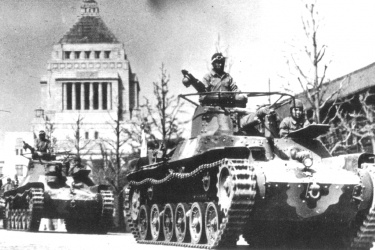