The Type 3 Chi-Nu was the second follow up to the venerable Type 97 Chi-Ha medium tank. Whereas the earlier Type 1 Chi-He had replaced its predecessor's 57-mm gun with a high velocity 47-mm gun, the Chi-Nu went one step further, mounting a far more powerful Type 3 75-mm gun which at last gave the Japanese Army a tank comparable in firepower to contemporary European designs. The fitting of the new gun was clearly a response to the threat posed by the US M4 which considerably outgunned Japan's lighter tanks in the early- and mid-war period. Because the Chi-Nu was seen as a stopgap before the introduction of the Type 4 Chi-To, it largely retained the basic hull of the Type 97, albeit with a doubling of armor protection to a level similar to that of the Type 1. Otherwise, most other mechanical components remained the same including the bell crank suspension and Mitsubishi Type 100 engine, the penalty being slightly slower speed on account of the heavier weight that resulted from the larger turret and gun. By the time the Chi-Nu entered production, Japan's industrial capacity was being hampered by US bombardment as only a small number were eventually built, all of which remained at home in preparation for a US invasion and thereby never seeing combat.

The Type 3 Chi-Nu was designed as a stopgap measure to provide a tank capable of countering the US M4 before the larger Type 4 Chi-To came into service, which in the event did not happen (only two units were built). There were no variants from the basic tank version. 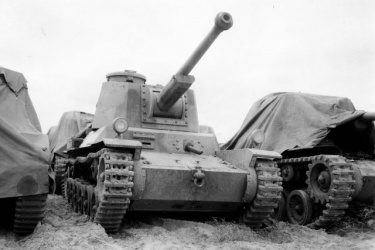