The success of the StuG III prompted the development of a successor, the StuG IV, based on the hull of the PzKpfw IV. Initially, however, priority had been given to the Jagdpanzer IV (also based on the same hull), but Allied bombing of the Alkett plant producing the StuG III led to the StuG IV project being revived. Superficially, the StuG IV strongly resembled its predecessor, and mounted the same 7.5cm StuK 40 gun that was used in the tank destroyer variants of the StuG III (otherwise known as the StuG 40). Armor protection was similar between the two vehicles, although some later variants had extra concrete slabs on the front of the superstructure and driver's compartment. Late versions also featured a remote-controlled machine gun and a close-defense weapon (Nahverteidigungsgerät). The StuG IV saw widespread service during 1944-45 on all fronts despite never truly replacing its predecessor, which was the most widely produced German armored vehicle of the war. Both were employed in generally similar roles as assault gun and tank destroyer.

Trials of what became the Sturmgeschütz IV (SdKfz 167) began in 1943 with production ordered in December of that year. There were no variants although late versions had extra cement blocks added and different secondary armament configurations as described above. 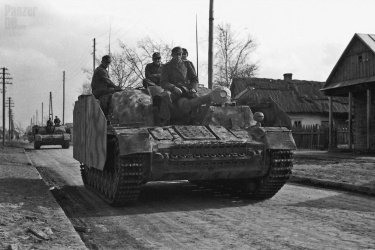