Conceived before the war as an assault gun, the StuG III became one of the most important armored vehicles in the German arsenal during most of the mid- and late-war years where it was produced in larger numbers than any other. The original design of the StuG III called for a vehicle with a low profile, adequate armor protection, and mounting a high-caliber gun, in this case the short-barreled 7.5cm StuK 37. The hull chosen was that of the PzKpfw III, with the turret replaced by a fixed superstructure whose low profile was possible as a result of mounting the gun inside the hull rather than on top of it as was the case with most other turret-less German vehicles. Armor protection was adequate by early and mid-war standards, and benefitted from a sloped superstructure front, but initial variants suffered from the lack of secondary armament. As the war progressed, the potential for the StuG III to be adapated into a successful tank destroyer became evident and it gradually evolved towards this role, mainly by the fitting of more powerful guns that culminated in the long-barreled 7.5cm StuK 40, and also by adding additional defensive measures including prominent Schürzen side skirts for protection against anti-tank rifles and hollow-charge rounds, while also adding machine guns for defense against infantry. Zimmerit anti-magnetic mine paste was also used on some vehicles. The StuG III initially became available for the invasion of France in 1940 but production did not step up until the development of the final Ausf G variant which accounted for the bulk of StuG IIIs built during the war. These saw extensive combat on all fronts where they were particularly useful once the German Army was on the defensive. There were also provided to numerous Axis allies as well as other nations including Bulgaria, Hungary, Finland, Italy, Romania, Spain, Syria, and Turkey. Surviving or captured examples were also used by Norway and Yugoslavia post-war.

Orders for a new infantry support vehicle were issued in June 1936 and pre-production 0-Serie vehicles were based on the PzKpfw III Ausf B chassis. Production of the Sturmgeschütz III Ausf A (SdKfz 142) began in January 1940 using the PzKpfw III Ausf F chassis instead. Various mechanical improvements resulted in the Ausf B, while the Ausf C and D featured revisions to the superstructure including a different armor layout for the front; some Ausf Ds were built as command vehicles as well. The Ausf E was the last to features the short-barreled StuK 37, and also had further refinements to the superstructure. It was also the first to feature an MG34 machine gun but no mount or gun shield was provided. This overall structure was mostly retained in the Ausf F, also known as the StuG 40 (SdKfz 142/1) which was the first to mount the longer StuK 40 gun, making it the first of the tank destroyer variants. It was provided with a revised mantlet and an exhaust fan on the superstructure roof. Refinments on the hull on the lines of late-version PzKpfw IIIs resulted in the Ausf F/8. These also had additional armor plates bolted on the front hull and superstructure while armor thickness at the rear was also increased. The last and by far the most widely produced variant was the Ausf G, which was characterized by the inclusion of a cupola for the commander, as well as a shield for the machine gun. The superstructure sides were also slanted. Over the course of the Ausf G's production, a new Saukopf ("sow's head") gun mantlet was added, as was a co-axial machine gun and a remote-controlled machine gun on the roof. Other variants included the StuH 42 assault howitzer with a 10.5cm gun, and the StuG (Fl) flamethrower vehicle. 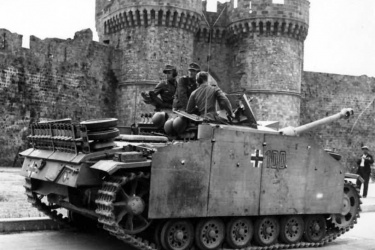