The Jagdpanzer IV was built as a successor to the StuG III but intended more as a tank destroyer than an assault gun. It also attempted to address one of the main shortcomings of earlier tank destroyers, namely the lack of a well-protected and enclosed superstructure for the crew. As the name implied, the Jagdpanzer IV was based on the PzKpfw IV hull using the same suspension and drive train but with various structural modifications including a different shaped front which had the vertical front plate replaced by two sloped plates. The superstructure benefited from a low profile and extra protection from the highly sloped slides (early versions were often fitted with Zimmerit anti-magnetic mine paste). Initial versions were armed with the 7.5cm PaK 39 gun but this was then replaced with the longer-barreled Pak 42, the same one fitted on the Panther tank. The gun enabled the Jagdpanzer IV to successfully engage most Allied tanks. Combat service began in Italy with the Hermann Göring Division, but it was later used in the Eastern and Western fronts until the end of the war.

A prototype of the Jagdpanzer IV (SdKfz 162) was completed in December 1943 with production beginning shortly after, replacing that of the PzKpfw IV in Vomag's assembly lines by May. Pre-production units were designated 0-Serie and had the 7.5cm PaK 39 L/43 gun before full production began with the standard L/48. Eventually it was decided to upgrade the armament to the more powerful PaK 42 L/70. Those vehicles so equipped were known as the Panzer IV/70 (SdKfz 162/1) with an (V) suffix for those built by Vomag and (A) for those built by Alkett. Vomag versions, which were the most widely produced of all variants, retained the characteristic low superstructure whereas the Alkett versions (intended as an interim version) featured a revised, taller superstructure that did not extend the full length of the fuselage. Variants with their respective caliber guns are often referred to as Jagdpanzer IV/48 and Jagdpanzer IV/70. 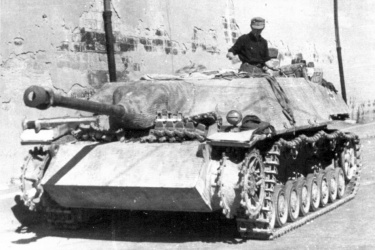