The Panzer III was the first attempt to design a proper battle-worthy tank following the German rearmament in 1935. It was the result of a requirement by General Guderian for a pair of tanks, one of which was to be armed with a high-velocity gun for its anti-tank (the Pz III) and another designed for infantry support (the Pz IV). As such, the initial Pz III was armed with the 3.7cm KwK 36 gun but the tank was designed from the start with a wider turret ring with the intention of eventually fitting a 5cm gun; this foresight helped extend the tank's service life significantly and therefore avoid the quick obsolescence that was characteristic of British tanks. Likewise, armor protection was also gradually improved through the addition of extra plates. This would enable it to be impervious to most British early- and mid-war guns at anything but short range or from the sides and rear. Unfortunately, it was outmatched by the Soviet T-34 on the Eastern Front as well as the KV heavy tanks. Mechanical performance was generally good, notwithstanding an overly complex ten-speed gearbox in early versions, and this allowed it to fight successfully in the desert as well as in the frigid Russian winter. Less than 100 Pz IIIs were available for the invasion of Poland but numbers gradually increased: 350 were used during the invasion of France and 1,500 were ready by the time of Operation Barbarossa. By 1943, however, they began to be phased out and replaced by newer versions of the Pz IV, as well as the Panther and the Tiger heavy tanks. Still, the Pz III's chassis remained as the basis of the highly successful StuG III assault gun among other conversions.

Plans for the PzKpfw III (SdKfz 141) were drawn up as early as 1934 and numerous prototypes were tested in 1936-37, with the Damiler-Benz design chosen for production. The Ausf A, B, C, and D were only built in small numbers as numerous refinements to the suspension took place and the initially weak armor (just 15 mm maximum) was improved in the Ausf D. Most of these were retired after the invasion of Poland. The Ausf E and F were the first variants that were mass produced, and incorporated a larger engine and gearbox as well as escape hatches in the turret. A number of these were later up-gunned with a 5cm KwK L/42. The Ausf G had extra rear hull armor, a redesigned cupola and wider tracks, and mounted either the 3.7cm or (later) 5cm guns. Even thicker armor was installed on the Ausf H as was a new transmission, drive sprocket and rear idler, as well as a turret basket. The Ausf J had the standard 50 cm armor thickness as well as other hull modifications. Later versions were equipped with the more powerful long-barreled L/60 gun. This was useful against British Grants and Valentines in North Africa but still inadequate against the Soviet T-34 or KV-1. The new gun was fitted as standard on the Ausf L which also had spaced armor on the mantlet, as well as the Ausf M which incorporated fording equipment and some were fitted with prominent Schürzen side skirts. The last tank variant was the Ausf N, which was armed with a 7.5cm KwK L/24 with high explosive and shape charged rounds. The spaced armor on the turret was removed and a new cupola installed, but were otherwise similar to the J, L, and M series. Other variants included the PzKpfw III (Fl) flamethrower, Tauchpanzer III submersible tank (intended for use during an invasion of England), Pz Bef Wg command vehicles, Pz Beob Wg (SdKfz 143) armored observation posts, Bergepanzer III recovery vehicle, Pionierpanzer III engineer vehicle, and Munitionspanzer III ammunition carriers. The StuG III was a highly successful assault gun using the Pz III chassis and is described separately. 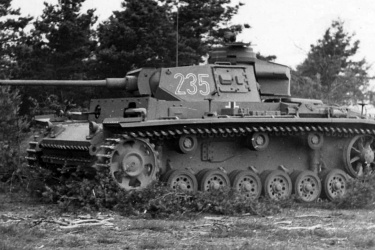