The Panzer II was initially designed as an interim light tank before more heavier designs (the Pz III and IV) could enter service. It was substantially heavier than its predecessor, the Pz I and the 2-cm cannon was an improvement in firepower although still not comparable to an actual tank gun. The Pz II went through numerous improvements in its armor protection to the point that final models had a thickness of up to 80 mm. The suspension had five independently sprung roadwheels which gave it excellent mobility, and some late models came with the interleaved roadwheels that were also found on heavier tanks like the Panther or Tiger. The Pz II featured prominently in the early blitzkrieg campaigns, and it was the most widely used German tank during the invasion of France. By this time it was used mostly in the reconnaissance role where it was more apt due to its weak armor and armament compared to contemporary medium tanks, although it did have the advantage of being fitted with radio equipment, something that early Allied tanks generally lacked. It was also used in North Africa as well as the Eastern Front before being retired in 1943. The chassis was used for numerous other uses including the Wespe and Marder self-propelled artillery and anti-gun platforms.

Prototypes of the PzKpfw II (SdKfz 121) were built in 1935 and sent for trials in Spain during the civil war. Pre-production versions were known as the Ausf a, b, and c and were easily distinguished by having six wheels rather than the five on production models. The initial Ausf A suffered from an underpowered engine which was improved in the Ausf B which also had new reduction gears and tracks. Meanwhile, the Ausf C had upgraded armor. There were the main variants available when the war began in 1939. The Ausf D and E were designed for cavalry units and were built in small numbers, they featured a redesigned front which included a false visor. The only other tank variant was the Ausf F which appeared in late 1940 with even thicker front and side armor and a higher velocity cannon which was still inadequate for tank combat. A number of variants were built specifically for the reconnaissance role and introduced a torsion bar suspension with interleaved road wheels. These included the Ausf G which had its armor protection unchanged, the Ausf J with significantly increased protection (up to 80 mm), and the Ausf L Luchs with a widened superstructure and an enlarged turret and served until the end of the war. A flame-thrower variant was known as the Flamingo (SdKfz 122) and were based on the proposed Ausf D and E variants that were ultimately never used. Other variants included the 15cm SIG33 SP infantry gun, LaS 762 and Marder II SP anti-tank guns, Wespe SP howitzer, and the Schwimmpanzer II amphibious tank which were used as normal tanks in actual combat. 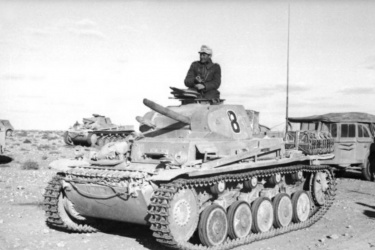