The Panzer I was the first tank to be developed by Germany since World War I, and was developed despite the restrictions imposed by the Versailles Treaty whereby the German Army was prohibited from having tanks. As such, the first vehicles were completed without a turret in order to bypass the treaty until rearmament was officially announced in 1935. The Pz I was a two-man light tank, with modest armor protection and armed only with a pair of 7.92-mm MG 34 machine guns mounted on a small turret that was traversed by hand. In its original incarnation it was underpowered by the powerplant was eventually improved; this resulted in a lengthening of the hull and a modification of the suspension which was based on the Carden-Loyd light tanks of the 1920s. Despite these limitations Pz Is saw extensive action during the Spanish Civil War as well as the early blitzkrieg campaigns in Poland, France and Yugoslavia where it benefited from the scarcity of adequate enemy anti-tank guns (it was vulnerable to the British 2-pounder however). By 1941 it was retired from front-line service although non-tank variants remained in service throughout the war.

The precursor to the PzKpfw I (SdKfz 101) was the PzKpfw I Ausf A Ohne Aufbau ("without turret") which was conceived in 1933 and followed up by the initial production PzKpfw I Ausf A in 1934. Improvements to the engine, suspension, and a slightly enlarged hull resulted in the Ausf B, the most widely produced version, some of which were also equipped with radio equipment. A small number of Ausf C vehicles were also produced which had increased armor protection. The turret-less Ausf B Ohne Aufbau was used as a recovery vehicle. Addition of a radio transmitter resulted in the Kleiner Panzerbefehlswagen (SdKfz 265), with a revised superstructure to accommodate the radio operator. A self-propelled gun platform was known as the 15cm sIG33(Sf) while a self-propelled anti-tank gun was designated 4.7cm PaK(t), both of which were in service until 1943. Other variants were used as demolition charge layers, armored bridgelayers, flame-throwers, and ammunition carriers. 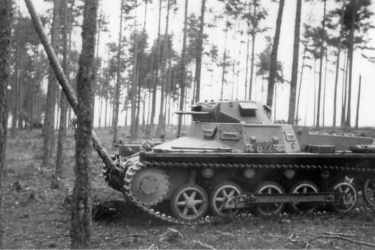