The Magach series of tanks refer to Israeli versions of the US M48 and M60 Patton tanks, many of which have undergone extensive local modifications to give them superior protection and firepower compared to the originals. These modifications were first undertaken after the 1967 Six-Day War and included tanks supplied to the Israeli Defense Force by West Germany, the US as well as captured Jordanian M48s. Firepower on the M48s was improved through the installation of British L7 105-mm guns (with a locally developed thermal sleeve); the turrets were also modified to give them a lower profile, a key vulnerability in the Patton series. Additionally, the original gasoline engines were replaced by uprated Teledyne Continental diesels, which were safer for crews since diesel fuel is less flammable. By the 1980s, most were also fitted with explosive reactive armor (ERA) and some even featured components of the newer Merkava tanks such as the tracks, engine as well as electronic components. Magach series tanks saw extensive action both in the 1973 Yom Kippur War as well as the 1982 Lebanon War, suffering heavy losses in the former conflict. In the 1980s they began to be replaced by the Merkava and by 2006 the last Magach was phased out of active service (although many remain in storage).

Conversion of M48s to Magach standard began after the Six-Day War; previously the Magach 1 referred to the M48A1 while the Magach 2 was the M48A2C. The first modernized variant was the Magach 3 which replaced the orignal guns with the British L7 in a modified turret, and added the new AVDS-1790-2A engine as well as a new Allison transmission. This was followed by the Magach 5 which was a relatively unchanged M48A5 but with an AVDS-1790-2D engine and a new transmission. The Magach 6 was a modernization of the M60 series, with a lower profile, Blazer ERA and numerous other equipment upgrades. Further improvements led to the Magach 7, which by the time was significantly different in appearance to the M60 due to its more modern, angled turret which had extra appliqué armor. Of these, the Magach 7A was characterized by a flat turret front, while the Magach 7C featured an angled turret front and the Magach 7D angled turret sides as well. These featured the same engine used in the Merkava. A similar export-based development of the M60 was also known as the Sabra, designed for Turkey. Outwardly similar to the Magach 7C, the main difference is the use of the MG251 120-mm smoothbore gun, the same used on the Merkava Mk 3. 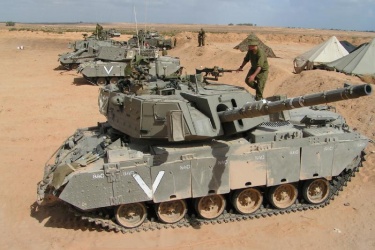