The LAV (Light Armored Vehicle) is the second generation of vehicles designed around the Swiss MOWAG Piranha wheeled APC. In contrast to the preceding AVGP family based on the Piranha I 6 x 6, the LAV is based on the Piranha II 8 x 8. The initial production version was the LAV-25 built for the US Marine Corps and this was followed up by the Bison MILLAV (Militia Light Armored Vehicle) built for Canadian Militia but later adopted by the Armed Forces as well. Design of the Bison borrowed heavily from the LAV-25 and was therefore designed in the remarkably short period of just seven days. Unlike the LAV-25 or the Grizzly, the Bison lacks a turret and has a raised roof for the eight-man troop compartment which is accessed through a power-operated ramp rather than doors. It also featured a rail system on the floor which allowed for easy removal and installation of equipment, allowing it to be quickly converted to different roles. The other major member of the LAV family is the Coyote reconnaissance vehicle, intended to replace the Lynx and the Cougar. The Coyote is mechanically similar to the LAV-25, operating the same turret and Bushmaster 25-mm gun but lacking amphibious capability. However, the Coyote features a highly advanced sensor suite including (depending on vehicle) long-range TV cameras, laser rangefinders, thermal imaging sensors, FLIR, and a mast-mounted MSTAR battle surveillance radar with a range of up to 24 km. It also features add-on armor that can protect against 30-mm rounds in the frontal arc. The LAV series has since been superseded by the LAV-III family. Export clients included the Australia (known as the ASLAV) as well as a small number by the US National Guard.

The Bison was based on the US LAV-25 and includes the basic APC version as well as an 81-mm mortar fire support vehicle, a command post vehicle, mobile repair team vehicle, as well as a maintenance and repair vehicle equipped with the same crane carried by the preceding Husky WMRV. The Coyote was first proposed in 1992. It can be fitted with either a battle group or fixed brigade kit, with different sensors between them. 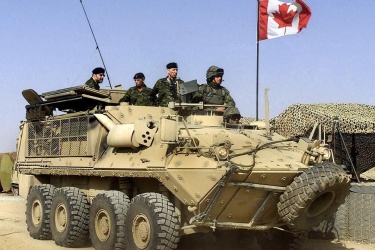