The AVGP (Armored Vehicle General Purpose) is a family of vehicles based on the Swiss Piranha I adapted to a Canadian requirement. The AVGP was among the first contracts signed by MOWAG and resulted in three distinct vehicles, the Cougar, Grizzly, and Husky all of which are based on the first generation Piranha 6 x 6 and are operated by three-man crews. Among the differences with the orignal versions are the incorporation of heaters for the engine and crew compartment, as well as cold-starting aids. The Grizzly is the basic wheeled armored personnel carrier (WAPC) version, which is armed with a small Cadillac Gage turret mounting 12.7-mm and 7.62-mm machine guns and which can carry up to eight infantrymen, providing them with both firing ports and vision blocks on the hull sides and in the rear. The Cougar is a wheeled fire support vehicle (WFSV) which features a larger turret based around that used in the UK Scorpion combat reconnaissance vehicle, armed with the same 76-mm gun as well as a secondary coaxial 7.62-mm machine gun. It is equipped with a laser rangefinder for target acquisition. Other roles for the Cougar include reconnaissance as well as a tank trainer. Finally, the Husky is a wheeled maintenance and recovery vehicle (WMRV) which features a 4.5 ton capacity crane. The AVGP series became the standard wheeled APCs of the Canadian Armed Forces up the 1990s when they began to be replaced by the second-generation LAV (light armored vehicle) based on the Piranha II 8 x 8. Despite plans to convert existing units into support vehicles in the 21st century, most have since been sold off or reassigned to city or provincial police services.

The first Canadian-built vehicles were provided in 1979. The basic APC version is the Grizzly which accounted for the bulk of production. Much of the remainder was the Cougar fire support vehicle which was also used extensively for reconnaissance until replaced by the Coyote. The Husky is the maintenance and repair vehicle. Plans to convert the AVGP vehicles into other support roles fell through. 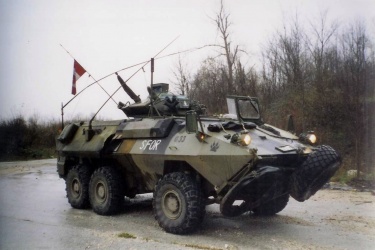