The LAV-III (originally known as the Kodiak, a name that is no longer used) is the third generation of wheeled APCs for the Canadian Armed Forces based around the Swiss MOWAG Piranha. The LAV-III is developed from the Piranha III 8 x 8 although it also borrows from the earlier LAV series, incorporating the Delco Defense turret used in the Coyote reconnaissance vehicle as well as the USMC's LAV-25 albeit with a new all-electric drive system. The turret is armed with the same M242 Bushmaster chain gun plus a pair of machine guns. Unlike the earlier AVGP/LAV vehicles, the LAV-III is powered by a more powerful Caterpillar diesel. It also lacks amphibious capability. Protection is improved via an add-on armor kit can increase survivability up to 30-mm hits and IEDs, slat armour to protect against RPGs can also be added. The LAV-III was used extensively as part of the Canadian Armed Forces' contribution to the Afghanistan war, where it has suffered the highest losses of any other Canadian combat vehicle, mostly from mines and IEDs. As a result, a planned upgrade to the LAV 6.0 configuration will boost protection even further, and add a host of electronic improvements. Other versions of the LAV-III include a command post, ambulance, and maintence and recovery vehicle. The LAV-III also served as the basis for the Stryker family of vehicles for the US and has been exported to Colombia, New Zealand, and Saudi Arabia.

The first LAV-III vehicles were rolled out in 1998, with most being the basic APC version. Other variants include the TOW Under Armour anti-tank vehicle, pioneer vehicle, forwar observation controller, and infantry section carriers. The LAV-III has been the basis for the US Stryker family (described separately). as well as the New Zealand NZLAV family. An upgraded version for the Canadian Armed Forces which incorporates the lessons of the Afghanistan war is the LAV 6.0 with significantly higher armor protection and an improved fire control system as well as a new battlefield management system. Sub-variants include many of the same types as the LAV-III but also an armored ambulance and a reconnaissance vehicle to replace the earlier Coyote. The export LAV 700 for Saudi Arabia has a new hull and more powerful engine. 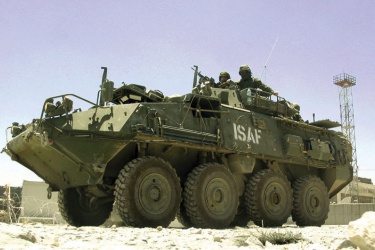