The Cromwell (A27M) was the most important British tank in service after D-Day, where it shared duties with Lend-Lease supplied Shermans (and later, the Comet) during the Allied drive into Germany.It was the result of a 1941 specification for a "heavy" cruiser tank with greater armament and armor protection than in predecessor, the Crusader, which frequently suffered against its more powerful German opponents in North Africa. To compensate for the greater weight, the Cromwell was fitted with the Rolls-Royce Meteor engine, while armament was based on the 75-mm QF Mk V gun which unfortunately was obsolete by the time of the Normandy landings. Armor protection from the riveted (later welded) hull was also insufficient, particularly its weak belly, and the hull gun was seen as unnecessary. Still, the good speed of the Cromwell showed its worth after the Allied breakout from Normandy when the disadvantages from close combat in the bocage no longer applied. It's low profile was also an advantage compared to the Sherman, although the latter was seen as more mechanically reliable. The 7th Armoured Division was the first to be equipped with Cromwells, but reliance on the Sherman (particularly the Firefly) continued throughout the campaign. Still, the Cromwell remained in British service until 1950 where it saw combat early in the Korean War. Other post-war users included Czechoslovakia, Finland, Greece, Israel, Poland, and Portugal.

The precursor to the Cromwell as the A24 Cavalier which introduced the familiar riveted hull and boxed turret, but was armed with a Liberty engine and a 6-pounder (57-mm) gun. The engine was soon proved insufficient for a tank of its weight and it was built in only small numbers and never used in combat. It was then decided to incorporate the more powerful Rolls-Royce Meteor but lack of availability resulted in the Liberty engine being used yet again in the A27L Centaur, some of which were later equipped with a 75-mm gun, but were use mostly in training although the Mk. IV (armed with a 95-mm howitzer gun) did see some combat. Finally, the Meteor was installed in the definitive A27M Cromwell Mk. I. Centaur conversions resulted in the Cromwell Mk. III while the Mk. IV (which included some conversions as well), was the most widely used variant. The Mk. V was the first to be built with a welded hull, while the Mk. VI was, like the Centaur Mk. IV, equipped with a 95-mm howitzer. The Mk. VII was an up-armored variant and saw limited action during the war. Other conversions to Mk. VII standard included the Mk. VIIw (originally Mk. Vw), and Mk. VIII (Mk. VI). Other non-combat variants included the Cromwell ARV (Armoured Recovery Vehicle), Cromwell Command/OP (Observation Post), Cromwell CIRD mine-exploder, and Cromwell Prong with a Culin Hedgerow Cutting Device for use in the bocage. 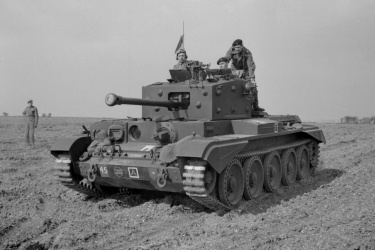