The Crusader (A15) cruiser tank was one of the workhorses of the British Army during the North Africa campaign. It was a direct evolution of the Cruiser Mark IV and the Covenanter, both of which it strongly resembled with its low profile hull and riveted turret with V-shaped faceted sides. The Christie suspension was also similar aside from some minor modifications such as an extra wheel station and coil springs located inside the hull, this gave excellent performance in the desert and frequently enabled Crusader crews to exceed the tank's top speed (to 40 mph) although this would often result in the engine breaking down. This was a common problem among early vehicles, which suffered from mechanical issues stemming from the lack of a prototype but were mostly corrected later. Armament was typically weak, initially with a 2-pounder that was later replaced with a 6-pounder; still not enough to have an edge against contemporary German tanks and anti-tank guns. The Crusader first saw combat during the relief of Tobruk (Operation Battleaxe), and all major desert battles thereafter including El Alamein. Some still saw action in Tunisia and Sicily but by then were replaced by Shermans and later, Cromwells. A few non-tank variants were used in Northwest Europe after the D-Day landings.

The Cruiser Tank Mark VI (A15) was developed in paralel to the Mark V Covenanter and like many British tanks of World War II, was ordered without a prototype (something which led to early teething troubles). The Crusader Mk. I was the initial variant with a 2-pounder gun and an auxiliary front machine gun turret that was later removed. This was also the case in the Mk. II which had additional armor protection. The Mk. III was the final production version with a 6-pounder gun and further armor upgrades. Those units equipped with a 3-in howitzer were known as Mk. I CS and Mk. II CS and otherwise identical to their base variants. Non-tank versions included the Crusader III AA Mk. I, Mk. II, and Mk. III anti-aircraft platforms, the first fitted with a Bofots 40-mm mount, and the other two with an enclosed turret with twin 20-mm Oerlikon cannons (some carried triple cannons but not used in combat). Other versions included the Crusader Gun Tractor for carrying the 17-pounder gun and used extensively in Northwest Europe, the Crusader ARV (Armoured Recovery Vehicle, Crusader Dozer, Crusader Dozer and Crane (ROF), and Crusader AMRA (Anti-Mine Roller Attachment) that was not used operationally. 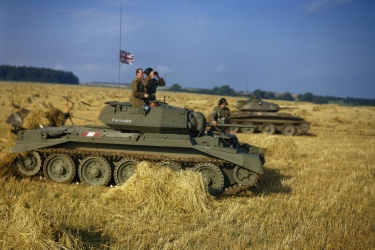