The Challenger (A30) was the first British tank to be fitted with the powerful 17-pounder gun, although teething troubles prevented it from seeing widespread service. British experience in the North African campaign demonstrated that their tanks were chronically outgunned by their German opponents, and the fitting of the 17-pounder was seen as the solution. The hull of the A27 series of tanks (Centaur and Cromwell) was seen as the ideal platform, although the hull and suspension were revised to take in the extra weight and larger turret needed. Despite these adjustments, which resulted in a longer and wider vehicle, the Challenger had numerous problems including excessive weight, slow traverse, restricted ammunition storage, and no deep fording capability. A backup measure involved fitting the 17-pounder into a Sherman hull and the result was the Firefly which was easier to produce and saw widespread service. Only around 200 Challengers were built some of which served in Northwest Europe with reconnaissance regiments.

The first pilot models of the A30 was ready by August 1942, with prototypes assessed in January 1943 and deliveries of the Cruiser Tank Challenger beginning in March 1944. There were no other variants besides the standard tank version. 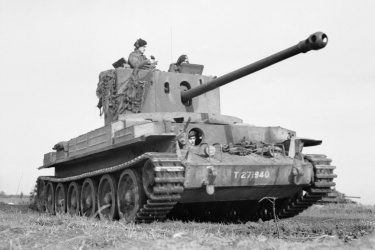