The Comet (A34) was the last British tank to be used in combat during World War II and a significant step up from the under-gunned cruiser tanks that had formed the backbone of British tank strength throughout the conflict. It was developed as a stop-gap measure before the Centurion, and as a result borrowed heavily from the Cromwell. This was most notable in the hull which retained its predecessor's hull gun and front plate, as well as its poor belly protection. It nevertheless featured an improved suspension to allow for better cross-country performance given its greater weight. Armament was significantly improved thanks the addition of a 77-mm HV gun, a development of the 17-pounder but that could be fitted on a smaller turret. This enabled it to be the only indigenous British tank that was capable of defeating German armor at long range. Unfortunately, the Comet arrived too late in the war to make an impact, by which time mass encounters against German tanks was rare; only the 11th Armoured Division ended the war fully equipped with Comets. These remained in British service early in the post-war period despite being gradually replaced by the Centurion although units in Berlin and Hong Kong retained their Comets until the late 1950s. A few were exported to Cuba, Finland, Ireland, South Africa, and Burma where they remained in service for longer.

The first prototype of the A34 Cruiser Tank Comet was completed in September 1944 although mock-ups had been ready a year earlier. The delays were attributed to the need for more extensive modifications to the Cromwell than originally envisioned. No variants were ever produced, and it was reclassified as a medium tank after the war. 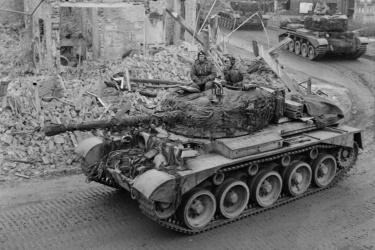