Despite sharing the same base designation as the AMX-10P IFV, the AMX-10RC is an entirely different vehicle designed for reconnaissance duties but shares some of the same automotive components as its counterpart. Most noticeable is the fact that the AMX-10RC is wheeled (6 x 6), rather than tracked, although its skid-steer system functions similarly to those of a tracked vehicle allowing it to turn by moving one set of wheels faster than the other. Additionally, the unique hydroneumatic system allows adjusting the suspension of the entire vehicle as well as just one part of it. The AMX-10RC packs a powerful punch thanks to its 105-mm gun capable of firing NATO-standard ammunition, and is equipped with thermal imaging equipment allowing night engagements. As a result, AMX-10RCs formed an important component (two regiments) of the French contribution to the 1991 Gulf War, and it has also been used more recently in Afghanistan. Additional users include Morocco and Qatar.

The first chassis of the AMX-10RC was completed in June 1971 and entered service in 1981 where it gradually replaced the Panhard EBR in French Army units. No major variants have been built although various private modernization schemes have been proposed. Existing units have received incremental upgrades over the years, notably new Baudouin engines in place of the original 260-hp Renault-built HS 115. 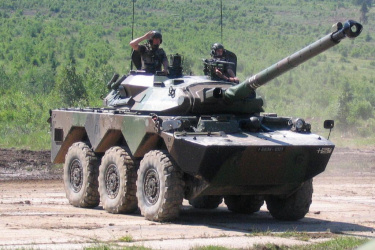