The 155 F3-Am (often referred to as the 155 Mk F3) was designed as a more powerful follow-up to the 105 AU 50, intending to replace US-supplied M41 vehicles that were supplied in the immediate post-war years. Also based on the AMX-13 light tank chassis, the 155 F3-Am is remarkable for being the smallest and lightest 155-mm SPG ever built. Changes to the chassis involved the removal of the rear idler and modification to support the larger mount of a 155-mm 33-caliber gun which was designed by the Atelier de Construction de Tarbes (ATS). The turret-less hull is made of all-welded steel armor which offers some protection against small arms fire, with no other defensive armament provided. Because of its small size, the vehicle only has a crew of two (driver and commander) and requires an accompanying ammunition carrier/gun crew transport, although up to four members of the gun crew can be carried for short distances. The gun has a rate of fire of three rounds per minute (or one round sustained) with a range of up to 25.3 km using base bleed ammunition. However, the small size of the vehicle required some compromises, notably the lack of NBC protection. Despite these limitations, the small size of the 155 F3-Am and low cost made it highly successful in the export market with a dozen foreign users, notably Morocco with nearly one hundred units acquired. This allowed it to remain in production into the 1980s, and despite its replacement in French Army service by the 155 AUF1, it remains in widespread use abroad.

Despite its relatively large production run, the 155 F3-Am was only built in its original variant although some export versions featured a Detroit Diesel 250-hp powerplant which raised speed to 64 km/h and range to 450 km. Plans to equip it with a longer 39-caliber gun never materialized. 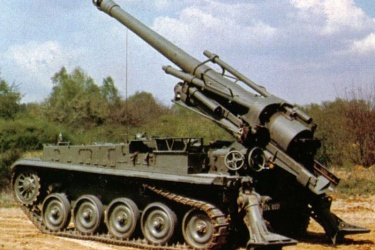