The 155 AUF1 (often referred to as the AMX-30 AUF1) is the French Army's most widely used tracked self-propelled gun currently in service. Designed to replace the venerable 155 F3-Am, it is based on the chassis of the AMX-30 tank which aside from some minor modifications is virtually identical. The 155 mm 40-caliber gun is mounted inside a large, box-like turret made of all-welded steel and which can carry a somewhat generous load of 42 projectiles fired by either an autoloader or manually. Up to six rounds in 45 seconds can be fired in burst mode using manual loading, with base bleed ammuntion providing a maximum range of 29 km. Additionally, it can also fire anti-tank rounds. The gun can be resupplied via horizontally folding doors in the turret rear, with complete reloading taking 20 minutes with a reduced crew of two while the gun is firing. Use of the AMX-30 chassis gave the 155 AUF1 very good speed for a vehicle of its size, being faster than its two main NATO contemporaries, the US M109 and UK AS-90. It also featured NBC protection, which its predecessor lacked. The 155 AUF1 entered service with the French Army in the late 1970s, and saw action during the NATO intervention in Bosnia during 1995. Export users include Kuwait and Saudi Arabia, as well as Iraq which received a large number of them during the 1980s where they were presumably used during the Iran-Iraq War. They are believed to have been lost during the 2003 US invasion.

The GCT (Grande Cadence de Tir) was the company designation of what would later be known as the 155 AUF1 in French Army service (GCT remains its main export designation). Variants include the 155 AUF1 H with an auxiliary power unit, 155 AUF1 T with an inertial navigation system, and the 155 AUF1 TA which was based on the AMX-30B2 chassis with a more powerful engine. A proposed version with a longer 52-caliber gun, later used on the CAESAR SPG, was known as the 155 AUF2 but did not enter service. 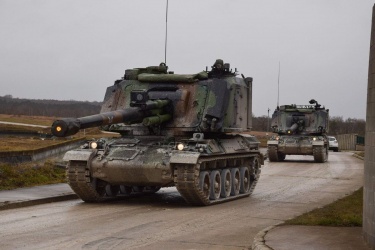