Representing the latest in French aviation technology, the Dassault Rafale (Squall) is an advanced multi-role fifth-generation fighter which will serve in both the Armée de l'Air and the Aéronavale well into the twenty-first century. The Rafale unified a variety of different requirements from the two services, mostly with the intention of replacing the aging Jaguars and especially the carrier-borne Crusaders although eventually it will substitute the Mirage 2000 also. The Rafale is very similar to its European contemporaries, the Gripen and the Eurofighter, with high-mounted canards and a delta-wing configuration. Over half of the fuselage is constructed from advanced composite materials, a digital fly-by-wire system is incorporated and avionics are state-of-the-art: these include and advanced RBE2 radar which has recently been upgraded into the RBE2-AA AESA, the first such radar installed in a major European fighter. The Rafale also includes a system integrated defensive aids known as SPECTRA which include jamming, Elint, active cancellation of incoming radar emissions, and datalinks between multiple aircraft. This helps compensate from the lack of stealth, although the airframe does incorporate features to reduce radar cross-section (RCS). The M88-2 engines are also capable of limited supercruise. Being a true multi-role aircraft, the Rafale is capable of carrying most French/NATO air-to-air and air-to-ground weaponry making it not only an extremely effective fighter but also a formidable strike platform, capable of carrying all French ordinance including laser-guided bombs and stand-off missiles. Integration of the ramjet-powered Meteor missile is currently taking place which will considerably improve its air combat capability. The Rafale is nuclear-capable and can carry the ASMP tactical nuclear missile as well. Rafales have been active in the conflicts in Afghanistan and Iraq but came into their own during the French-led 2011 Libyan campaign where they took center stage in the conflict, upstaging the UK's Typhoons which were not bombing-capable at the time. Export orders for the Rafale have been received by Egypt, Qatar, and India.

The Rafale A prototype took to the skies for the first time on 4 July 1986. Production variants were slightly smaller and lighter and basically come in three types. The first is the Rafale C single-seat multi-role fighter for the Armée de l'Air. This variant is complemented by the Rafale B two-seater trainer with full combat capability. Last but actually first to enter service is the Rafale M carrier-borne fighter for the Aéronavale which features the exact system specifications as the Rafale C but with a fuselage optimized for naval operations. It entered operational service in 2002 on board the aircraft carrier Charles de Gaulle. Ground-based versions followed from 2006. Across all versions, Rafales have been delivered under various standards the first of which, F1, provides solely air-to-air capability; F2 with air-to-ground and recon; and lastly, F3 with nuclear-capability. All existing units are gradually being brought up to F3 standard. 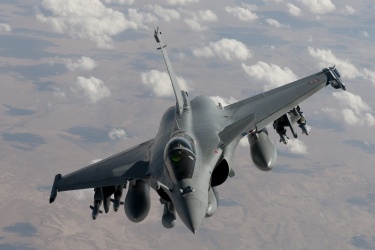