The ultimate development of the Mirage series of aircraft is the Dassault-Breguet Mirage 2000. This fourth-generation fighter, similar in role and capability as the F-16, features the traditional delta-wing configuration of the Mirage III/5 but the resemblance is only skin-deep as the Mirage 2000 is equipped with modern avionics like the RDI Doppler radar, a highly maneuverable fly-by-wire control system, HOTAS controls, a new and more powerful M53 engine, as well as the ability to carry a wide variety of air-to-air and air-to-ground ordinance. As with most French aircraft, it can be equipped with a removable refueling probe. A tandem-seat combat-capable trainer was designed alongside the single-seat version and it became the basis for subsequent strike variants, the Mirage 2000N tactical nuclear bomber and the Mirage 2000D conventional attack aircraft which can carry laser-guided bombs and stand-off missiles. The Mirage 2000 was first used in combat during the Gulf War, mostly in combat air patrol (CAP) missions and did not participate in any air-to-air engagements. The strike variants were first used in the Bosnia and Kosovo operations, serving later in Afghanistan and the more recent interventions in Libya and Syria. It has also met with notable export success serving in the air forces of the UAE, Brazil, Egypt, Greece, India, Peru, Taiwan and Qatar. Both Greece and India have used it in combat: in one notable engagement, one Greek aircraft downed a Turkish F-16 in 1996, the only time a F-16 has been defeated by an opposing aircraft. Mirage 2000s have been gradually improved in order to avoid falling behind the newer blocks of the F-16 and can still hold their own against other fourth generation aircraft. In French service, however, fighter variants have now been mostly replaced by the Rafale although strike variants remain in widespread service. 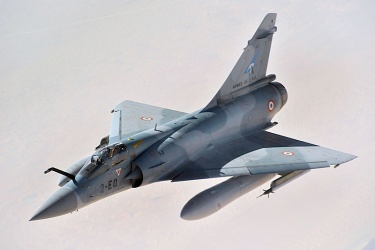