The SEPECAT Jaguar represented the first major collaborative effort among European nations to produce a common combat aircraft. Formed from a joint RAF and Armée de l'Air requirement for a tactical support aircraft in 1965, BAC and Breguet created the joint venture company SEPECAT to design and produce this aircraft which was based on the previous Breguet Br.121 project. Notably, production of each aircraft was undertaken in both countries with their distinct national components added only during the final assembly. The Jaguar is twin-engined shoulder-wing monoplane with supersonic speed and designed for operation in rough terrain as well as high survivability including an armored canopy. Air-to-air missiles could also be carried in overwing pylons. Avionics included an inertial navigation system, IFF system and RWR receiver. Despite their relative sophistication at the time, these were somewhat unreliable in practice and the lack of a radar limited the Jaguar's all-weather capability. Furthermore, they differed between French and British variants, with the British variants having a generally more sophisticated avionics set (notably a laser rangefinder, nav/attack system, and a moving-map display), whereas the French variants had a broader armament set including guided missiles. Both country's Jaguars were nuclear-capable and for a time formed the backbone of their respective tactical nuclear forces. Later in their careers, they were modified to carry targeting pods for the use of laser-guided bombs. French Jaguars were the first to see action in a series of very effective interventions in Senegal and Chad during the late 1970s and 1980s. Both countries later used Jaguars in the Gulf War, and during the Bosnia strikes, but were eventually retired in the mid-2000s once the Rafale and Typhoon were in service. Both countries retired their Jaguars in the mid-2000s. Export customers of the Jaguar include India (where it was produced under license), Ecuador, Nigeria and Oman.

First flight of a Jaguar was on 8 September 1968, this was the Jaguar E tandem-seat advanced trainer. The first combat variant was the Jaguar A designed specifically for use with the Armée de l'Air which also employed the Jaguar E. With the same airframe but slightly improved avionics, the Jaguar S was introduced shortly afterwards for service with the RAF where it was known as the Jaguar GR.1 while a two-seater RAF trainer was known as the Jaguar B (Jaguar TR.2). A slightly upgraded version and which introduced Sidewinder missile capability was the GR.1A. RAF units were eventually upgraded into Jaguar GR.3 standard which included a redesigned cockpit, new avionics like GPS and TERPROM terrain referenced navigation. The ability to use TIALD laser designator pods and more advanced recce pods was also provided, enabling them to use laser-guided bombs. French aircraft were similarly upgraded over their lifetimes although stand-off and precision weapons capability had been added much earlier. Further minor upgrades led to the GR.3A. A dedicated export variant is known as the Jaguar International (with numerous sub-designations for each country's aircraft). These were typically based on the GR.1 or TR.2 and feature provisions for a wide array of international armament and different avionics as well as slightly more powerful Adour Mk. 804 engines. 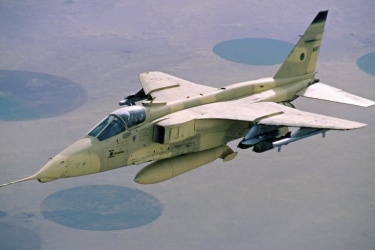